When I first got into hitting big cliffs, I hadn’t seen many women doing that, I just knew that I wanted to. At the time, movies and magazines were the only media outlet for skier visibility. I had VHS tapes of ski movies that I watched over and over again, and I would have to sit through minutes of fast-forwarding or rewinding, depending on which side of the tape the film was wrapped around, just to get to the clips that I loved and wanted to emulate.
There were a few girls going big: I watched Jamie Burge jump over a train once and was absolutely blown away. But I wanted more! The lack of female representation was frustrating, and I was thirsty for it.

When I did find women in print, it was generally an image of them smiling big in the middle of a low-angle powder turn (as if that was the only thing worth shooting in regards to women and skiing). I remember asking myself, “Where are the girls hucking cliffs?!” I knew then what I know now: women—I—was capable of more than what was being shown in the media. 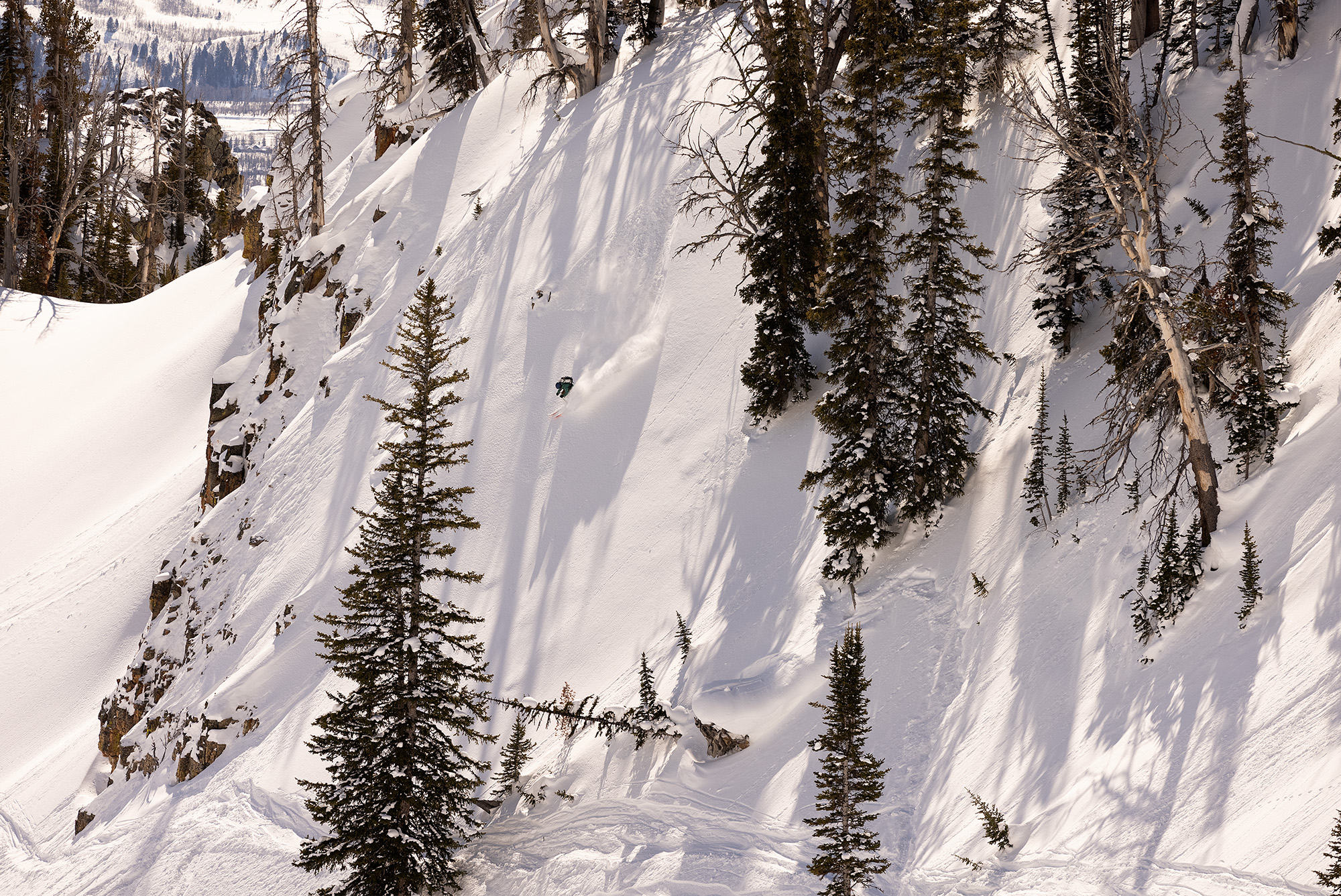 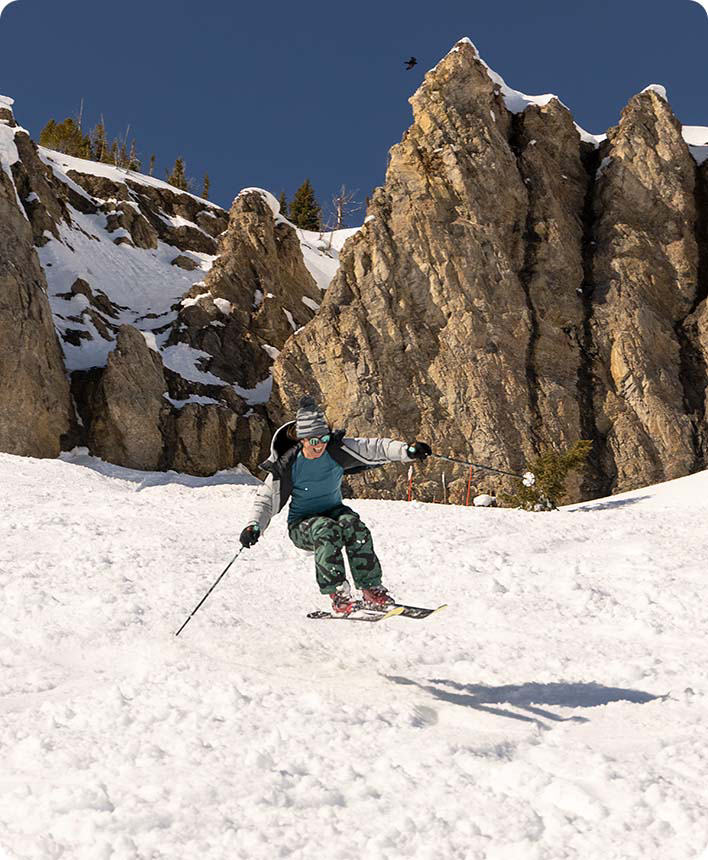 When I was getting into skiing, I mainly skied with boys. At the time there simply were not a ton of other women wanting to build jumps, hit cliffs, and find crazy lines. That is not to say they did not exist, there were just a lot more boys in the sport, so it was easier to coordinate. Together, we would ski around in a posse and find things to fling ourselves off of. Here’s how it would go: The first guy goes, gets a read for the speed, and straight-airs it. Then the next guy steps up, goes a little bigger, and throws a three. Then another guy follows, goes even bigger, and gets inverted. . . And then I roll up.
I hit it, (whatever happens in the air is unimportant) and all the guys say, “Hell yeah, Burks! You’re the only girl to hit that all day!” I feel really good! I get excited about being “the only one!” Momentarily, it pacifies my desire to push myself. But it subsides quickly, and I realize that I probably could have done something more. See, if there had been more ladies present trying the same thing, my effort wouldn’t have been enough. I would have actually pushed myself to stand out in my skill instead of settling for just being the only girl.
As a woman on top of a cliff with a bunch of men, there is part of me that watched the guys do things and thought, "Well, I could never do that." But it feels different watching another woman do the same thing... My competitive side kicks in! And I know I'm not the only one that feels this way. When you watch unidentifiable, unrelatable people accomplish something big, sometimes it’s easier to chalk it off. But when you see someone who you can relate to or want to identify with accomplishing big things, you suddenly believe that you could, too. More women in the sport means more real competition. More competition means progression.

Now picture this: Exact same scenario as above but replace the guys with all women... That “compliment” about being the only girl doesn’t hold up anymore. Instead it’s: “WOAH! GET OUT! I wanna try that!” after every single person, and before you know it, everyone’s pushing each other to go bigger and try something new. Nothing is cooler than seeing women building, planning, imagining lines, navigating, mitigating terrain, and sending difficult lines independent from a man’s vision. 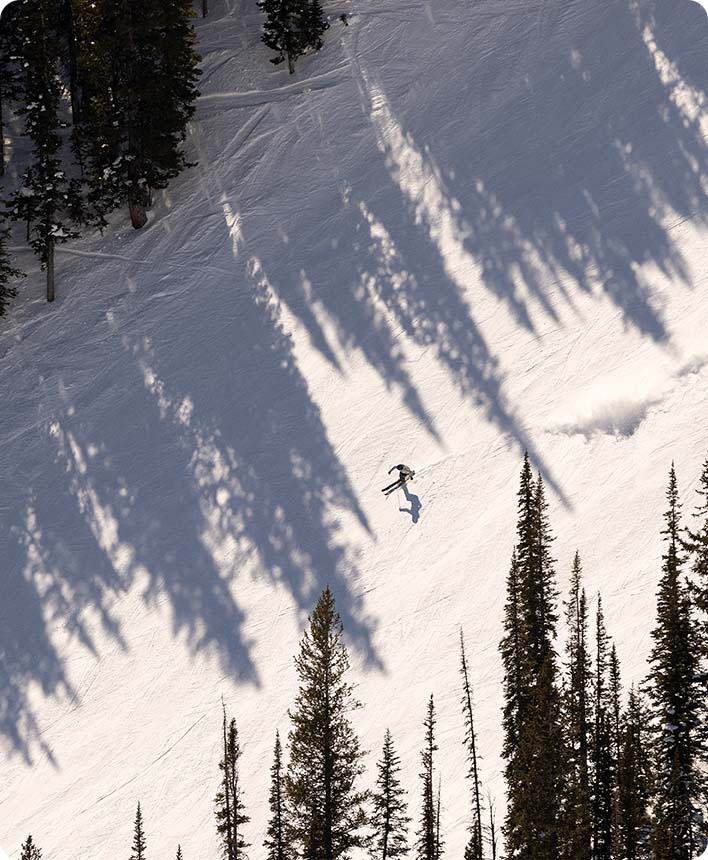 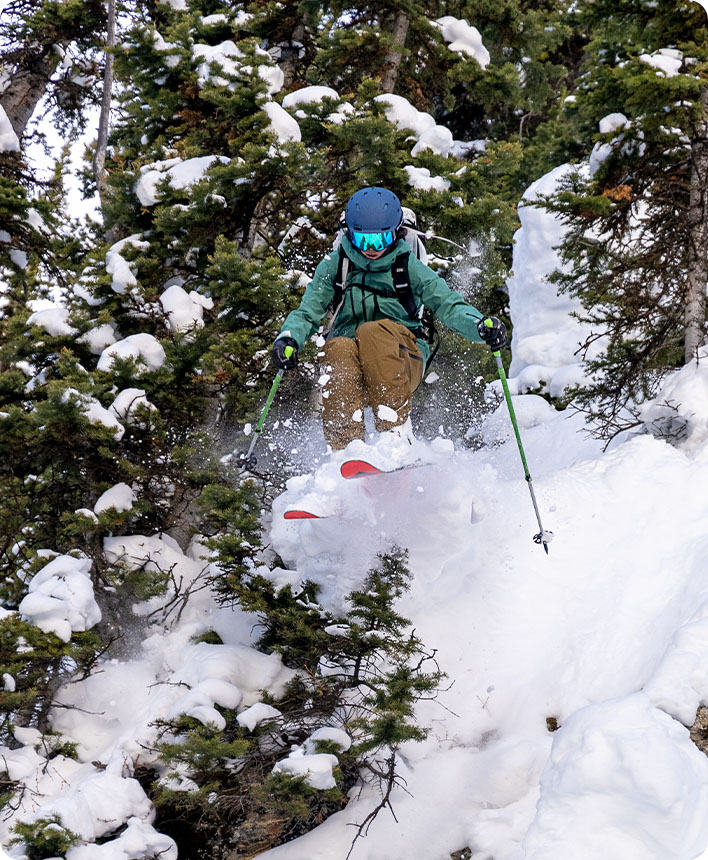 I didn’t always have that when I was starting out in my ski career; but what I did have was someone who made me feel seen and believed in me. And sometimes that’s just as important as seeing others that make you believe in yourself. That person for me was my mentor, Billy Poole. He and I skied together almost every day. He knew how I skied and possibly knew more about my capabilities than I did. He believed in me and pushed me accordingly. I trusted him, too. He would say, “You got this Burks,” and I did.

The “Church Double” is a rather iconic cliff at Alta that's actually a double-stager. You land the first cliff and immediately go off the second. One day Billy was hitting the Church Double over and over again, meanwhile, I was only hitting it as a single air. After a while, he had to go to work but said that I should go back up and try it as a double. He left, and I headed back solo. I was scared, but with his encouragement in the back of my mind, I went for it and rode out going 100 miles per hour.
My flip phone immediately started buzzing in my pocket: it was Billy. He was parked on the road in front of the double waiting for me to hit it before he went to work. He called from the road and screamed, “I KNEW YOU COULD DO IT, BURKS!!!”
That act of him staying and watching and giving me positive feedback was a defining moment. It showed me that finding time for those who are up-and-coming benefits the sport as a whole; and that’s my goal in fostering mentorship between women. I want to encourage gals to reach out to each other and all go stand on top of that cliff together! We don’t have to create a contest—we can show each other what is possible. This is what healthy, mentoring competition looks like.

I know I’m not the first or the only to have been told, “We already have a female athlete on our team. That box is checked...” This is the paradigm that poses other women as threats to each other. But, you shouldn’t have to fight for that one spot. There is room for us all.

Top executives in the world will say they don’t want to be the smartest person in the room; they want to surround themselves with the smartest people in the room. . . So, go find those other rippers. Go skiing with people that are better than you. And don’t let your ego or your fear of failure get in your way: GO!
Despite what anyone says, there are friends on a powder day. 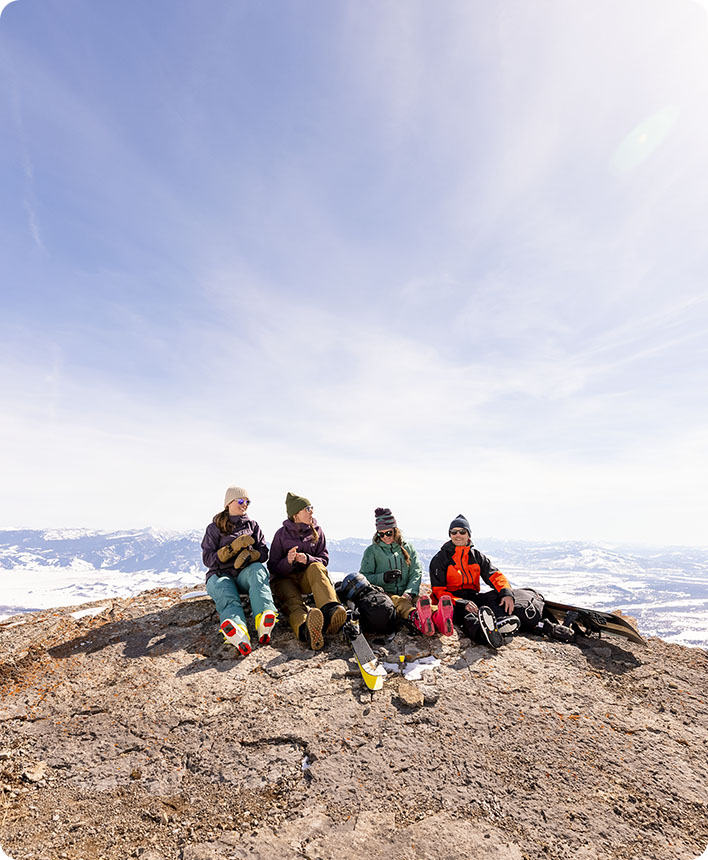 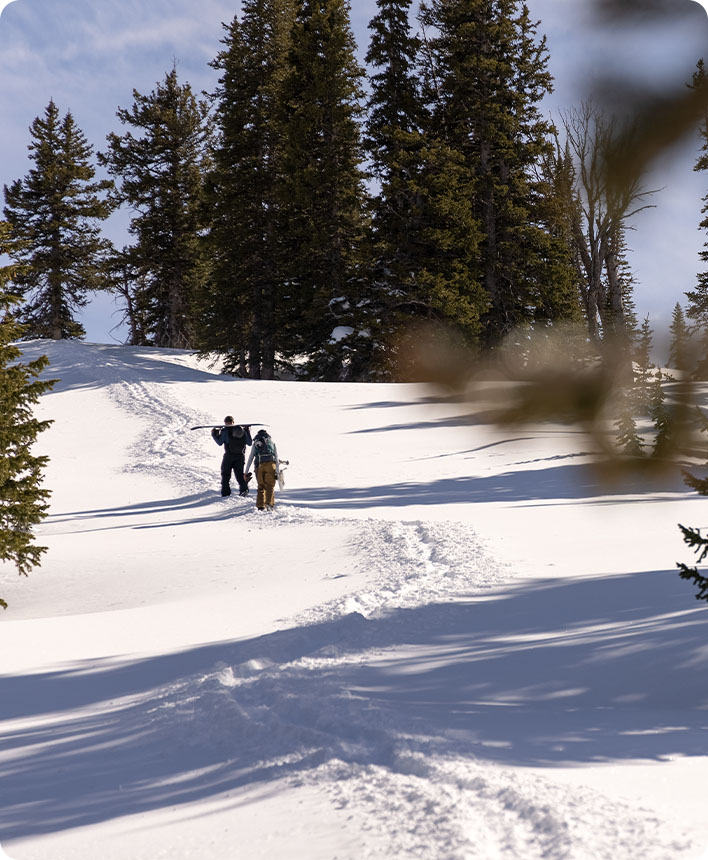 One of the other unique things right now is that visibility is available. When I got into the sport and tried my hand at being a professional skier you had three options: be in a ski movie, get published in printed ski magazines, or win competitions. You don’t have to pay to play anymore. We had camcorders and flip phones and the photos were taken on slide film! We all have things to say about Instagram, but there’s no denying that it gives you an opportunity to easily produce content. You can bust a smart phone out and do something rad. Doesn’t matter if it isn’t shot from a helicopter at first light with an expensive camera, content is content. What a beautiful thing to be able to rely on yourself for content.
I used to have to fight for visibility. I fought for those token female spots in movies and magazines because I wanted other women to open up a magazine and see a female going huge off a cliff. I wanted them to see what women could do so that they might believe in themselves enough to go do it! I would encourage all the up-and-coming shredders that can produce their own content to remember that there will be another wave of younger skiers and riders looking up to them… your visibility is a form of mentorship. Now you’re a part of the seeing is believing.
Getting to the bouldering spot wearing the RedEye daypack
get to know a pro
Big mountain skier, Rachael Burks.
She's known for skiing burly lines on some of the world’s steepest peaks, her vivacious enthusiasm and sequined outfits, and chucking backies off of anything and everything.
HER STORY
Page generated at: Mon Jan 30 2023 12:15:43 GMT-0000 (GMT)
Remove Product?