GOOGLE “CLIMBING GYM” and your screen will likely fill with pictures of super-fit people doing acrobatic moves on candy-colored holds, surrounded by other muscly climbers who all seem to be in impossibly good shape. Climbing in the gym for the first time can be intimidating, like competing in a weightlifting competition the first week you started working out. But trust us when we say: You can (and should!) climb. Yes, you. Everyone, including the people in those pictures, had to start somewhere, and there’s a good chance they felt the same way as you their first few times. The climbing gym is the perfect place to try climbing because it offers everything from the easiest climbing possible to climbs that are really, really hard. No matter what your level, climbing is not only fun, but it offers a full-body workout with a problem-solving component that’s done in a very social atmosphere. The mental and physical challenges are always changing and infinitely diverse—once you find success in one thing, there are approximately one bajillion other things to improve at. Don’t take our word for it, though. You gotta get out there and try it for yourself. To get rid of those first-time butterflies, the following article lays out how to get started and what to expect the first time you go to the climbing gym.

BEFORE YOU GO
All gyms will require a liability waiver, which you can often sign online before you show up. Check the gym’s website for any discounts they might offer on day passes (typical cost is usually $15-$30), or days and times for an introductory class. Many gyms will let you in for free the first time you visit, so take advantage of that and don’t be afraid to call with any questions. Gyms are always looking for new customers, so the employees will most likely be friendly and welcoming. If you’re feeling self-conscious about climbing in front of other people, ask the gym for the times when they’re less busy. Often this will be in the middle of a weekday, but sometimes early mornings are quiet too. If you can only go right after work or on the weekend when most gyms are slammed, try to be prepared for the crowds. Then right before you head out, find inspiration to crush indoor climbing with Kyra Condie, Alex Johnson, and Anna Liina Laitinen’s awe-inspiring social media posts! 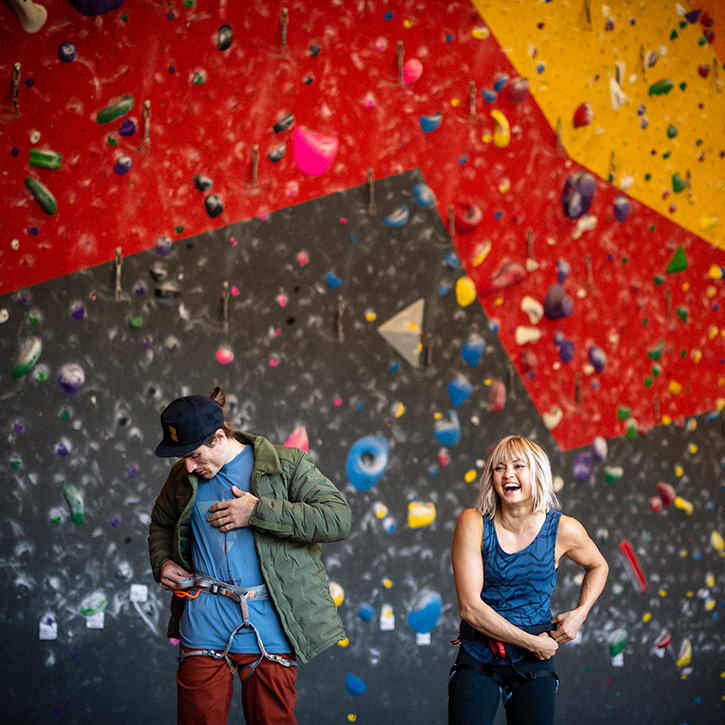 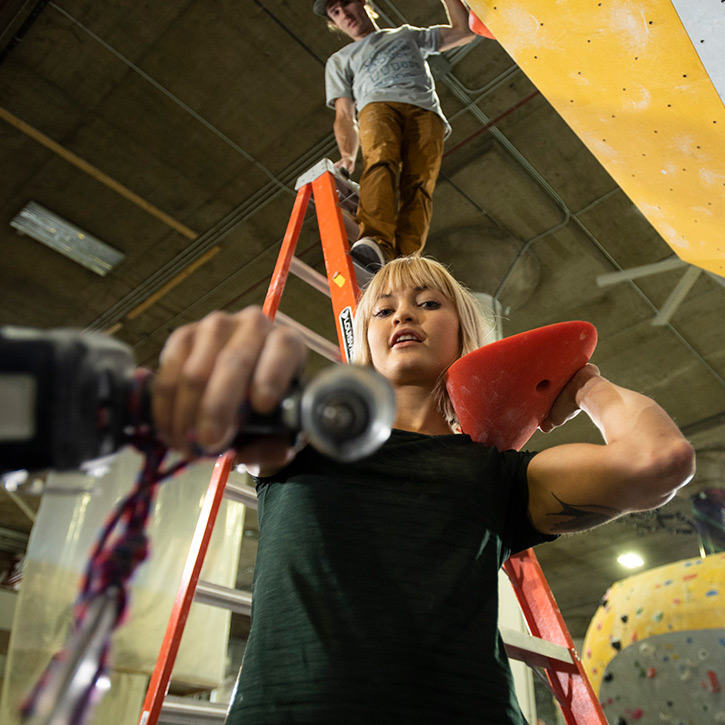 THE GEAR YOU NEED

Nothing—at least until you’re hooked and want to go every day! Everything you need can be rented at the gym: climbing shoes, chalkbag, harness, and belay device. If you have a friend who climbs, consider asking them to borrow gear. The most important gear for your first time is probably already in your closet. Choosing the right clothes is crucial to be able to do the bendy moves climbing requires, as well as being comfortable and feeling confident. As they say, “Look good, climb good!”

For the gym, it’s all about mobility, breathability, and personal style. Stretchy yoga pants or athletic tights are always a good option, but make sure they’re not see-through when you bend over. If you go with pants, opt for a looser fit but not too long and not too baggy. You want room to move, but not so much material that it gets bunched up under a harness or caught around your feet and ankles. Go with a light, breathable fabric, nothing heavy like denim or canvas. Many climbers prefer shorts in the gym year-round because it’s almost always hot and humid in there, so the more air flow, the better. If you go with shorts, follow the same rule as pants: looser fit but not too baggy. Basketball shorts and short running shorts are often uncomfortable and bunchy under a harness. For a top you can wear almost anything that lets you move your arms: athletic tank tops and regular-fitting T-shirts are perfectly suitable.

IT’S MORE FUN WITH FRIENDS
The social aspect of the climbing gym is one of its best features, and a way to keep you coming back. Climbing on a rope requires a partner, bouldering requires that you be surrounded by other boulderers, and being in the gym at all means everyone there shares the same interest in climbing. If you have any friends that climb, see if they want to show you around the gym for the first time. The climbing community can be a welcoming and open place, so if you don’t have a friend to go with, chances are you’ll find a new friend or two (or 10) once you start going to the climbing gym. The bouldering area is a great place to meet people by being friendly and open. If you find yourself working the same problem as someone, don’t be afraid to ask them how they did a certain move, or if they recommend any other problems in that grade range. Don’t tell climbers you don’t know how to do something, or critique their climbing, but a compliment and some curiosity can go a long way.
TAKE A CLASS
Some people might prefer a structured way to learn how to climb, and an introductory class or lesson can be the perfect fit. Depending on what type of climbing you want to pursue, classes can teach you all the knots, rope systems, safety checks, and movement techniques you might need in a hands-on environment that focuses on gaining actual experience. Often these classes or other group meetups organized by the gym can be a perfect place to meet new partners and other climbers who are at a similar level to you.
TYPES OF GYM CLIMBING
Modern climbing gyms have tons of training equipment, some that is climbing-specific and some that is for general fitness, like yoga, spinning, and weightlifting. All of that stuff is great, but chances are if you’re interested in a climbing gym, you just want to climb in the beginning. Below we outline the three types of climbing you can do in a gym: bouldering, toproping, and lead climbing.
Bouldering

This could be considered the gateway discipline of climbing. Many people get started climbing by trying bouldering first, and these days there are a lot of bouldering-only gyms. Bouldering in the gym requires no partner and very little gear—only climbing shoes and a chalkbag—and there’s no rope or technical safety systems to learn, so you can start right away. It’s also done relatively close to the ground, so there’s less of a fear component—but definitely still some fear! Bouldering focuses more on strength and power to complete difficult moves in short bursts, unlike the endurance required for toproping and lead climbing to stay on the wall for longer periods of time. Bouldering is the most social type of climbing, as you’ll spend a lot of time standing on the pads with other climbers. Often boulderers like to discuss moves and holds, working together to figure out how to complete a climb.

When a boulderer falls, she lands on a thick foam mat that absorbs the impact. These are usually permanently installed by the gym. (If your gym has movable crashpads, make sure to get proper instruction on where to place them.) “Spotters” are other climbers who can help you land safely on the pads. Make sure to learn safe spotting technique before attempting it yourself, and learning safe falling habits are important too. The climbs in bouldering are called “problems,” because often they require complex movement patterns to “solve” them and get to the top. Problems are usually graded using the V-scale, with VB or V0 being the easiest, and higher numbers being harder. Many gyms will set problems up to V13. (The hardest outdoor boulder problems are suggested at a grade of V17.) Some gyms will use their own grading systems with dots or colors, but they usually all correspond to the V-scale. A gym’s bouldering area has shorter walls, and might have some spots you can top out, meaning the climb ends when you’re standing on top. 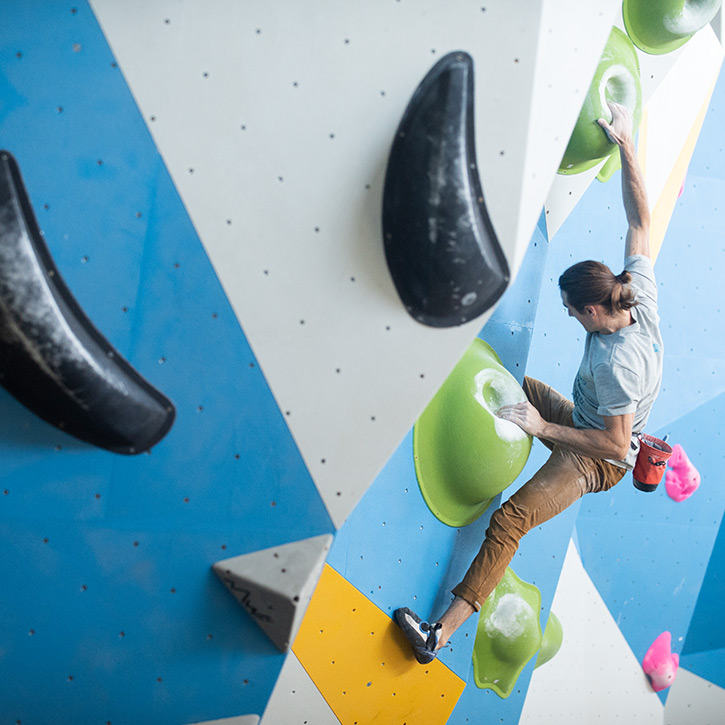 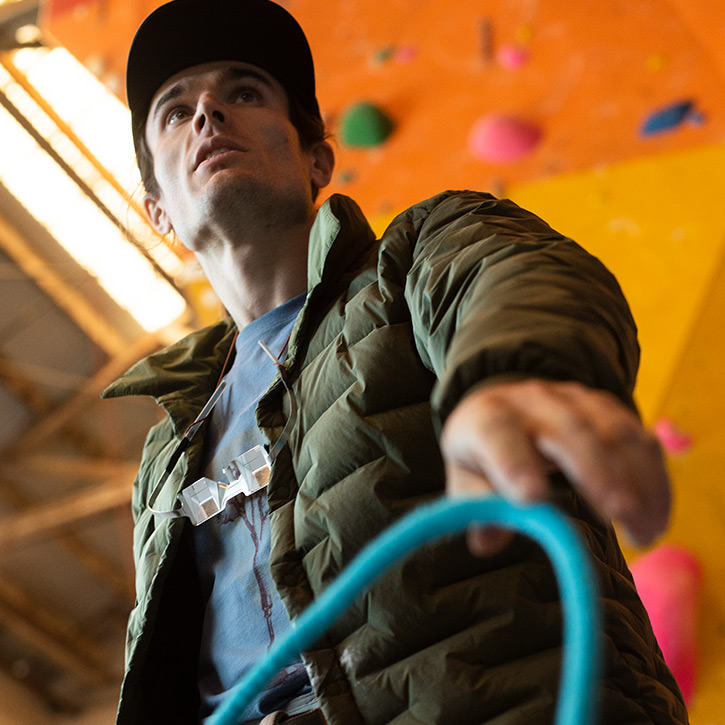 Toproping
If you are interested in climbing on a rope, you will start out by toproping. In the climbing gym, you’ll see ropes already hanging from anchors at the top of the wall. These are called topropes. The climber ties into one end of the rope, which runs up to the anchor then back down to the belayer, who is standing on the ground. The belayer is the climber’s partner who catches the climber if he falls. The belayer also lowers the climber back down to the ground. Both the climber and belayer need a harness, and proper instruction on how to tie into the rope, use a belay device, and do safety checks, among other things. You will need to pass a toprope belay test performed by a gym employee to toprope climb or belay, so ask at the front desk about how to get certified. With small falls and minimal technical knowledge required, toproping is a safe and popular way to try rope climbing.
Lead Climbing

Also called sport climbing, leading is a form of rope climbing where the rope is not already set up in an anchor at the top like it is with toproping. The same gear is required (harnesses, belay device, rope), but both the climber and belayer need more knowledge of technical systems and safety. Most climbers start out toproping to improve movement skills so they can then learn how to lead climb confidently. Then they might attempt to lead climb, which requires a higher level of technical skills. All gyms require you pass a lead belay test before being allowed to lead climb on your own. An intro to lead climbing class offered by the gym is an excellent way to learn all the necessary skills.

The climber, belayer, and the entire rope start on the ground at the base of the climb. The climber ties into one end of the rope, and the belayer clips in several feet down the rope from the climber. As the climber moves up the wall, he clips the rope into preplaced bolts, which minimize the distance he can fall. The belayer feeds out rope through the belay device as the climber goes up, always ready to catch a fall. Once the climber is done, the belayer lowers him to the ground. For both toproping and lead climbing, the climbs are called “routes,” and routes are rated by the Yosemite Decimal System (YDS). Climbs will be graded from 5.0 (easiest) to 5.14 (hardest). (The hardest outdoor sport climb in the world is 5.15d.) Sometimes the number will have a letter (a, b, c, or d) or a plus (+) or minus (-) sign after it, like 5.11a or 5.11-, which is easier than 5.11b and 5.11+. If an area of the climbing wall does not have any topropes already hanging, that means it’s for lead climbing only. 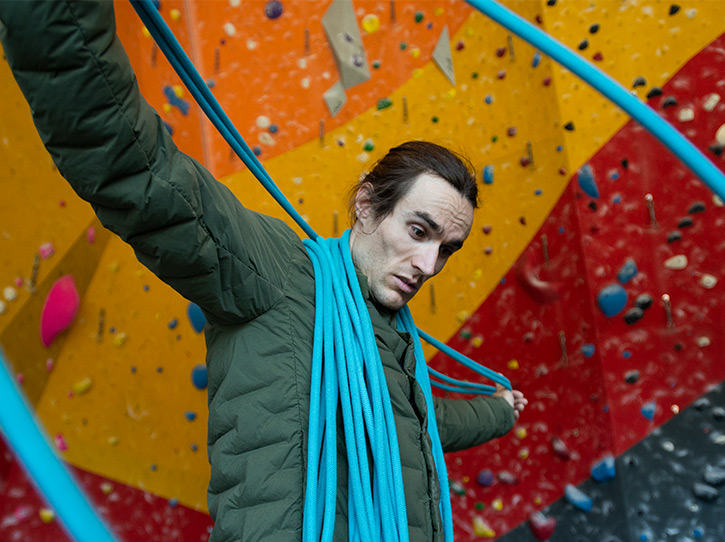