how to plan a climbing road trip

THE GREAT CLIMBING ROAD TRIP: Toss your gear and some clothes in a car and take off to whatever crag your heart desires. Stay as long as the weather is good and your psych is high, and when you leave, it’s fine because there’s another amazing crag right down the road. The climbing road trip is a rite of passage for every climber, the perfect combination of the freedom of the open road and the nomadic heritage of our sport. Being able to go anywhere and climb anything is incredible in theory, but nightmarish in practice. The options are so vast and varied that picking only a few spots can be downright overwhelming.

With more than 30,000 crags in the U.S., according to the Access Fund—not counting the drivable stone meccas of Mexico and Canada—where do you even start? With thousands of miles under his belt, Ethan Pringle has earned the status of Road Warrior on trips ranging from cross-country sending sprees to one that ended with his partner getting airlifted out of Yosemite after a bad scrambling fall (“She ended up being OK!”). In summer 2019, Pringle teamed up with Anna Liina Laitinen, an expert European road tripper, to visit some of the lesser-known crags on the northern coast of his home state of California. Pringle and Laitinen compiled their best road-tripping advice for how to plan and take the quintessential climbing road trip, whether you’re car camping with a hand-me-down tent from your mom’s college years or ballin’ out in a #vanlife-worthy Sprinter.

“Open a climbing magazine, go online, and find inspiration,” Pringle says. Figure out what specific climbs and areas inspire you, and then make a list. Laitinen likes to find destination ideas from the Instagram accounts of her favorite climbers. If you’re lucky enough to have a few weeks or months for a road trip, Pringle suggests to “go as far away as you can and stay for as long as you can” to maximize your climbing time. If you’re limited by a work or school schedule, then narrow down what spots on your list will be in-season during your time off. Mountain Project is a great place to start for the U.S. and 27 Crags for Europe, as these sites will offer the optimal time of year to visit and a general overview of the routes.

Once you’ve decided on an area, consider ordering the guidebook online. They are a plethora of thoroughly researched and fact-checked information compiled by a knowledgeable local (unlike Mountain Project’s crowd-sourced platform). You can plan where to stay, eat, and spend rest days beforehand. Plus, having the guidebook in hand is like having a guaranteed psych amplifier every time you open the book in the days leading up to your trip. Pringle also suggests reaching out to actual humans via social media. “People can give you tips or beta that might have been left out of a guidebook, or point you toward new areas,” he says. 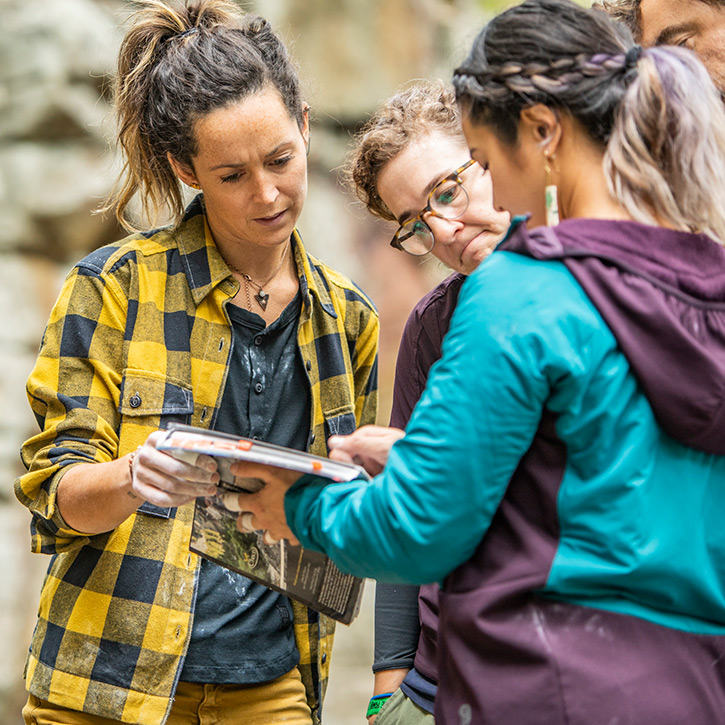 STEP 2: MAKE A PLAN (AND BE PREPARED TO CHANGE IT)

Once you’ve nailed down a few desired crags, estimate how many days you’ll want to spend at each, making sure to factor in driving times between them. [Google Maps is a great resource for building custom point-to-point maps.] A good rule of thumb for estimating climbing days is two days climbing, one day rest, then repeat. Driving days make excellent rest days, as long as you’re getting out to stretch and walk every few hours.

Whether you’re in a tent or a van, make sure to have at least two options for places to camp or park. If there are nearby campgrounds, see if you can reserve online or call ahead of time. Popular areas are often completely booked six months in advance. If the campgrounds are first come-first serve, get there as early as possible—head to the campground before you go out climbing for the day. BLM and National Forest land usually offer free camping, unless posted otherwise. If you’re in a van, have a list of ideas for where you can park and for how long. With so many vanlifers these days, sleeping in a vehicle is not so stealthy anymore. There’s nothing worse than finishing a long day of climbing and driving around in circles looking for a place to crash. 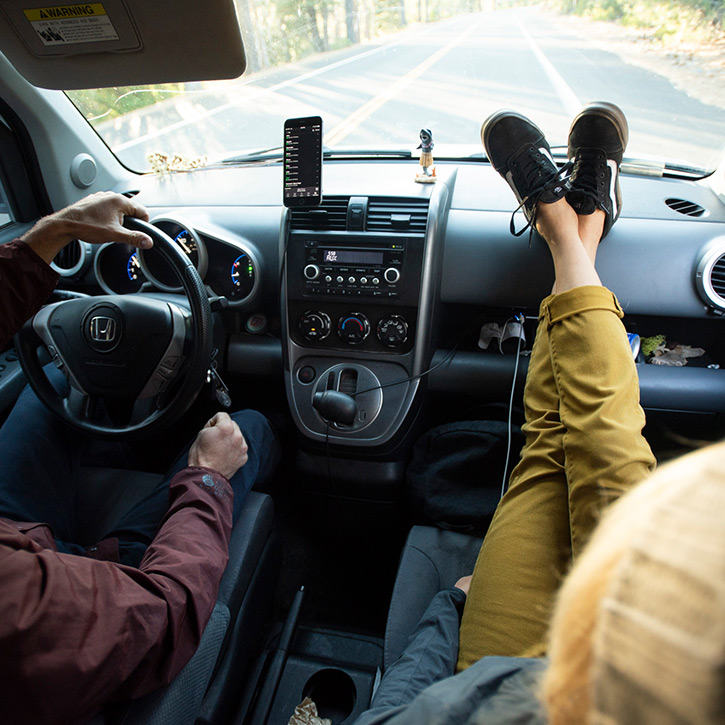 Road trips where you’re climbing and camping along the way mean constantly packing and unpacking your gear. Between human beings, dogs, camping equipment, climbing gear, clothes, and food, most vehicles will be filled to the brim with stuff. There’s nothing more annoying than moving the same three duffel bags, two climbing packs, and a huge kitchen box 10 times a day, so keep in mind how much space you will have and how everything might fit in the car. Laitinen once took a long road trip in Europe where they stuffed four climbers into a small car. “We got asked to pack light, but one of my friends packed the biggest duffel bag I’ve ever seen, with foam rollers, an ab roller, and a huge full-size watermelon,” she says. “We escorted the watermelon all the way to Spain and didn’t even eat it.” Plan with your partners so you’re not doubled-up on unnecessary gear, and leave the large fruit behind.

Be thoughtful about what gear you bring, but don’t pack so light that you end up like Laitinen on another road trip she took to Rifle, Colorado. It started out by getting pulled over by an officer for speeding. Then they realized they had forgotten water, and all the propane tanks were empty. Her climbing partner didn’t have a harness, nobody packed quickdraws, and they had left their sleeping bags and tents at home. “I guess we were so psyched about climbing, we forgot everything,” she says. It’s a good idea to pack all the gear you might need for your intended climbing, whether it’s a sextuplet Indian Creek rack or a crashpad and a pair of shoes. The more versatile your gear, the more versatile the climbing you can do without having to make any big, unexpected purchases.
STEP 4: HAVE A TICK LIST

Create a list of climbs you’d like to check out in each area, so when you arrive at the crag you don’t waste an hour of precious climbing time figuring out where to go. Be flexible, but have a few options sorted so you have a backup or two when the über-classic route you’re dying to get on has a line of six people waiting. Some road trippers might want to project the same climb for an entire trip, while others might never want to touch the same climb twice. Both approaches are totally valid, but make sure you’re considering your climbing partner’s objectives too.

While well-known areas like Squamish and the Red River Gorge are world-class for a reason, Pringle recommends seeking out the more obscure areas in between. Not only will there be fewer people at the crags, there’s also a better chance of having a quiet, secluded outdoor experience. When Pringle and Laitinen visited coastal crags near Crescent City, California, Laitinen experienced the quiet side of California. “It was awesome to climb in a remote area; I got to see a bear and seals,” she says. “We had long climbing days on an astonishing oceanside crag with mind-blowing sunsets everyday.” Once you have a loose plan, know that you’ll most likely end up changing it on the fly. You might have unexpected bad weather, or you might just get psyched on another area in the midst of your travels. As long as you’re willing to go with the flow, you’ll have a great time. (Bad weather days are also the perfect time to check out a nearby climbing gym.)
STEP 5: FOCUS ON PROPER REST AND NUTRITION

When you have limited days and oh-so-many new routes to climb, it can be tempting to want to pull down everyday. Do that long enough and your body will rebel, whether it be in the form of an overuse injury or deep fatigue. Living on the road can be exhausting even without climbing, so taking care of your body with enough rest and good nutrition is paramount. Try to follow the two-on-one-off model for climbing, and do not climb on those off days. Pringle will plan other outdoor activities, like basketball or a hike “to look at rocks I’ve never seen before.” If he does go to the crag, he leaves his climbing shoes behind so he’s not tempted. “I don’t find it hard to force myself to stay off the wall if I am prioritizing a project or a performance day, but I do feel better if I do at least a little activity on my rest day, rather than just sit inside all day.” Laitinen also likes active rest days, going on a walk or hike to study the crags and see the surrounding towns, and she also goes into overstoker mode. “I have to leave behind all my stuff on rest days, because otherwise I’ll climb without shoes or try to borrow a harness,” she says.

Nutrition on a road trip can be difficult, especially if you’re on an all-day drive where the only food options seem to come on buffet tables or in greasy bags. Stock up at grocery stores, plan to cook simple meals like you would at home, and carry healthy snacks to the crag. “It’s easy to change your food habits and spoil yourself when you’re on a trip,” Laitinen says, “but I try to eat the same way as I would at home.” She keeps snacks like baby carrots, cherry tomatoes, and cucumbers near her, and she drinks plenty of water. She says those cravings for unhealthy snacks often come when you’re thirsty or tired. “Avoid fast carbs and eat protein instead; it keeps you fuller longer,” she says. Pringle’s favorite snacks are sugar snap peas, carrots, and homemade sandwiches with lots of veggies and protein. While he does indulge on unhealthy gas station snacks occasionally, sticking to healthy options like nuts and coconut water is ideal. 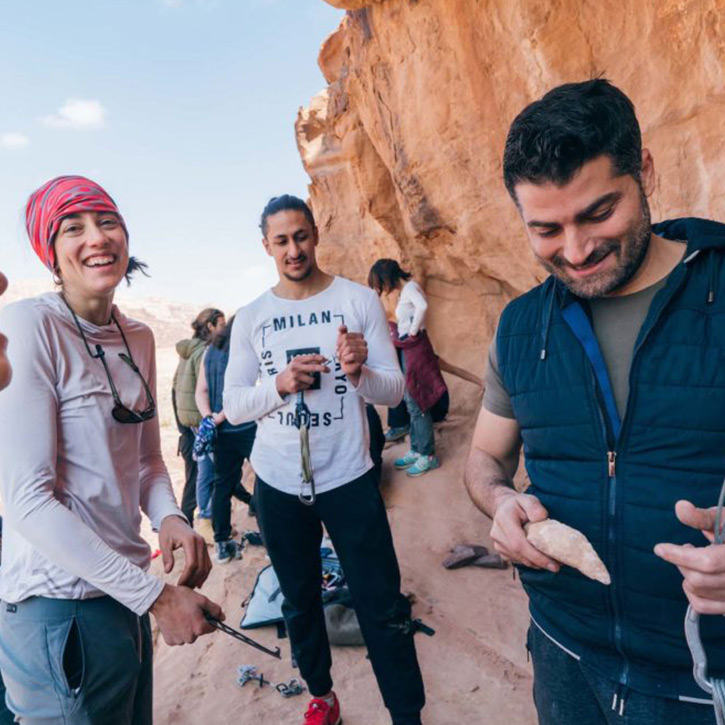