Hikers in the distance explore the Utah desert landscape
Getting Started in Gym Climbing
Drawing on the expertise of Mountain Hardwear climber and USA Climbing Team member Kyra Condie and USA Climbing Team Head Coach Josh Larson, this article addresses common questions new climbers have to help guide your entry into the world of indoor gym climbing.
How do you dress for success?
You want to wear something that’s comfortable (warm when it’s cold, light when it’s hot, breathable either way) and that won’t limit your movement. Generally, it’s ideal to wear something that’s lightweight, as well.

Most importantly, get rid of what’s in the way: loose clothing, long necklaces, hair in the face, etc.
FROM KYRA:
“I usually go for a pair of leggings like the All Day Favorite or a Dynama Short because they are easy to move in and really good to work out in.”
SHOP THE ALL DAY FAVORITE
SHOP THE DYNAMA SHORT 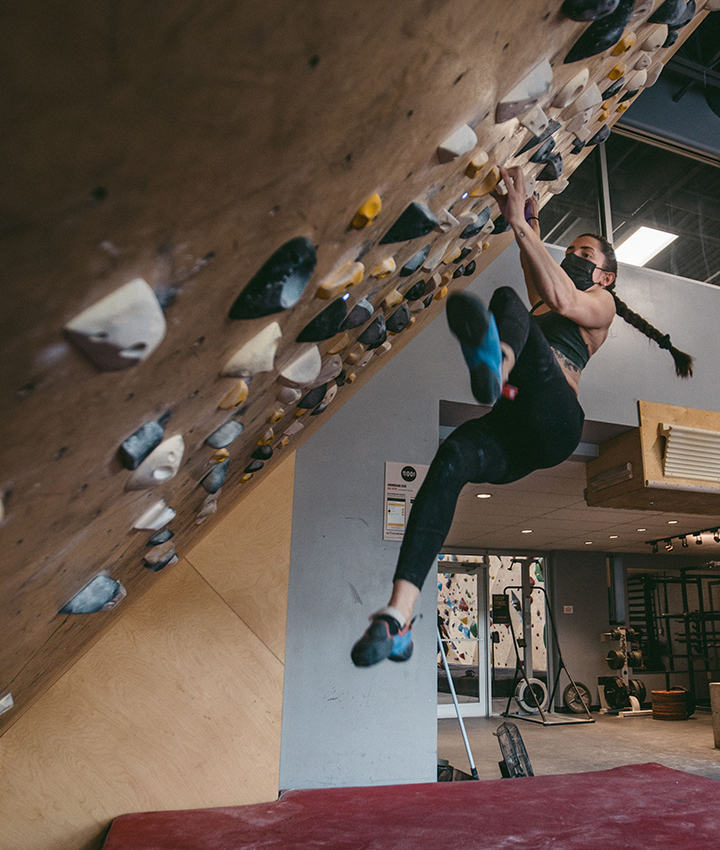 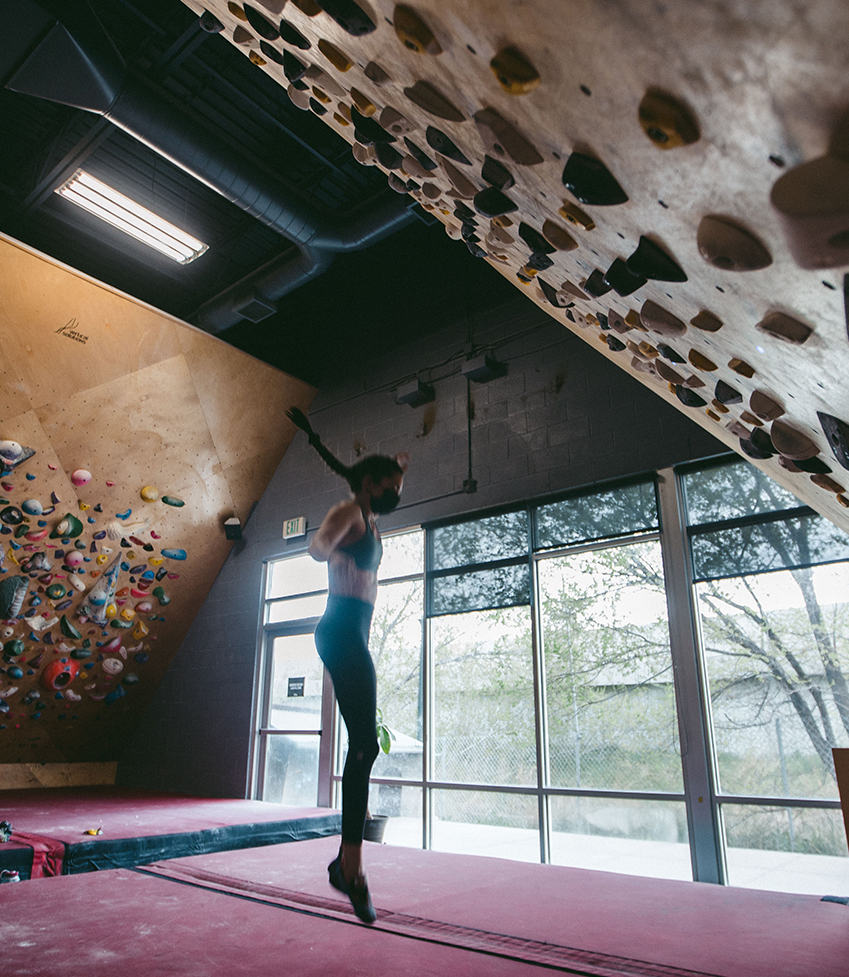 What does proper climbing technique look like?
TIPS FROM KYRA:
“Proper climbing technique can look a lot of different ways but using the toe of your shoe is really important. People tend to stand on the middle of your foot, but you want to stand on the toe. Keep in mind, pressing on your feet but not relying on them too much is also very important.”

“You want your weight to go up, so pushing towards the hold you want to go to is really important. Not getting too split out on the wall, and keeping your hands and feet close together is important, otherwise it’s hard to get out of the position.”
TIPS FROM JOSH:
“Always climb in this order: use your feet, move your hips, then move your hands. Most climbers that just start out only think about their hands and then their feet but forget they have hips.”
What is chalk? How does it work? And how should I use it?
Like in gymnastics, “chalk,” i.e. magnesium carbonate, will help reduce the moisture and sweat of the climbers’ hands, allowing better friction between the hand and the hold.

It comes in different forms, including powder or liquid.

Liquid chalk is squeezed into the palm of your hand and spread like a lotion. You have to wait until it dries, generally in 10 seconds or so, before climbing. You can generally feel the effects of it for a full climb, either a boulder or short route, depending on how sweaty your hands generally get.

Powdered chalk is contained in a bag that can be: small and attached to you in a belted chalk bag (usually for roped climbing routes), or big and left on the ground (usually for bouldering). You just dip your hand in the bag and rub the powder into your hands. Again, depending on your sweat level, it only stays on your skin for a few movements which is enough for a boulder but typically not for a route (which is why you have a chalk bag attached at your waist when climbing routes so that you can reapply, one hand after the other). Powdered chalk can also be contained in a clothes ball the size of the hand within your chalk bag. This limits the spread of chalk in the air. 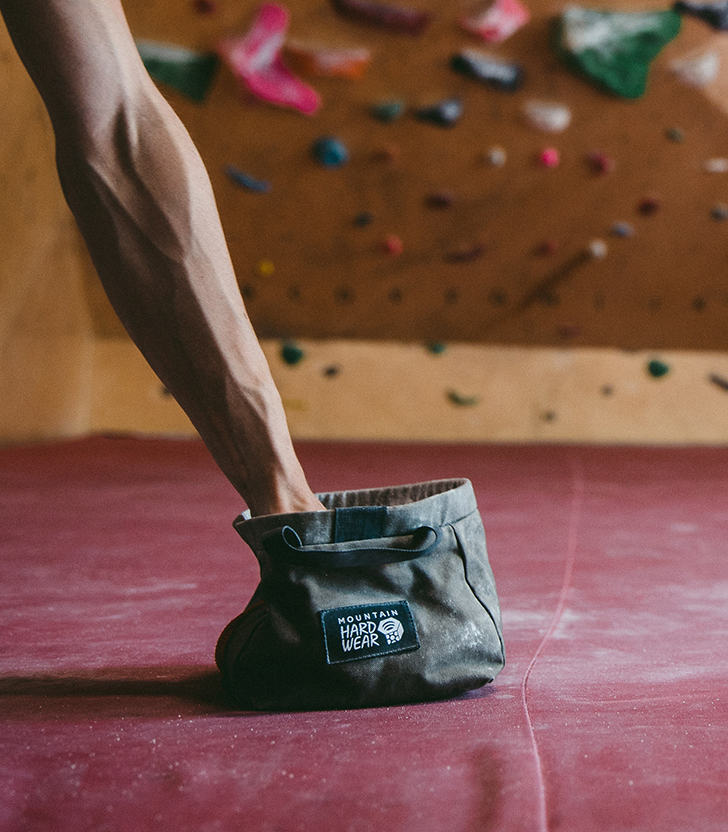 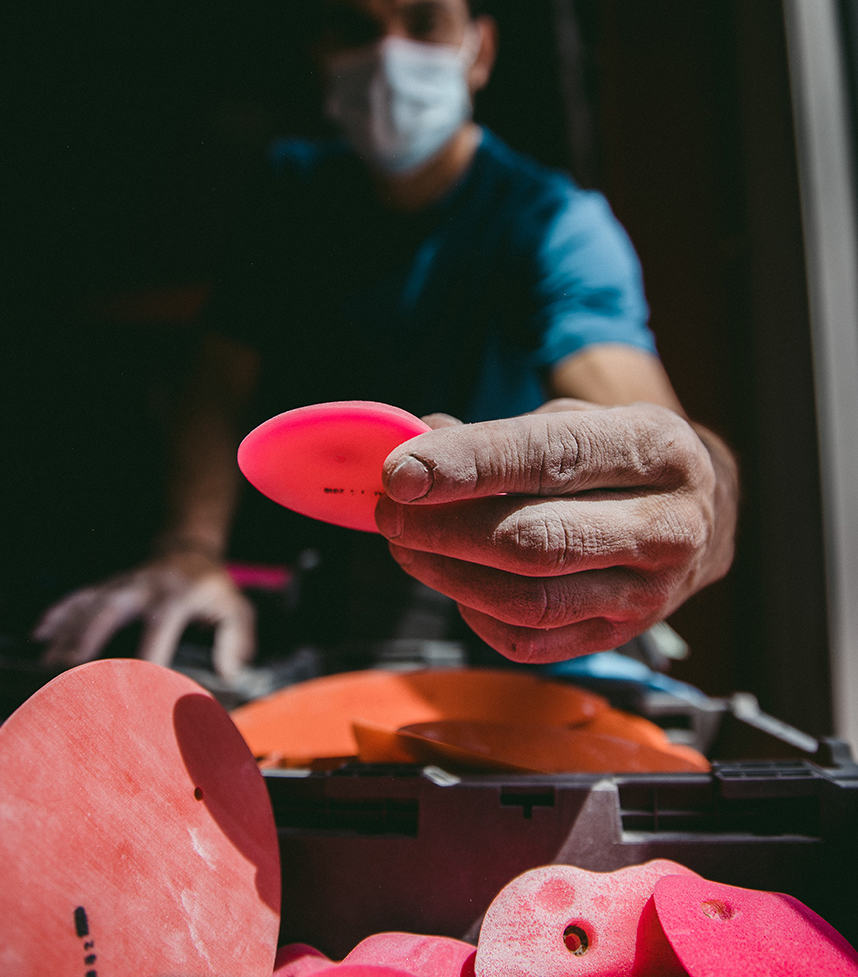 What do the different grades mean?
In order to scale the difficulty of a route or a boulder when it is free climbed, a grading system has been invented. Actually, there are a lot of them that have been invented across the world...

In the U.S., the Hueco scale is used for bouldering, ranging from V0 to V17, where V0 is the easiest and V17 is the hardest. In some gyms, you may see “VB,” the ‘B’ indicating “basic” or “beginner”—this is comparable to a V0.
FROM JOSH:
“The key is to build up your base. Don’t be scared to try harder than what you’ve done before, but spend days doing easier routes to work on technique. You have to get good before you can get strong.”
Does every gym use the same system?
Gyms across the U.S. use the two grading systems listed above, but they are associated with their own way to easily identify it with a color code. Gyms always have the grading chart hung around their facilities.
Where and how can I learn to belay?
“Belaying” is when you are the opposite side of the rope of the climber, with their life in your hands. It is important to know how to belay properly as it is a huge responsibility and is not one of those things you can just learn online.

Although the latter will teach the fundamentals and theoretical technique, you need practice and need to start with someone backing you up (holding the rope behind you) for the first few times. Messing up is simply not an option, so having an experienced climber ready to catch your climber in the event of a mistake increases your partner’s safety.

To learn how to belay, the safest option is to see which educational programs your local gyms offer or find a professional guide or instructor that will privately teach you. 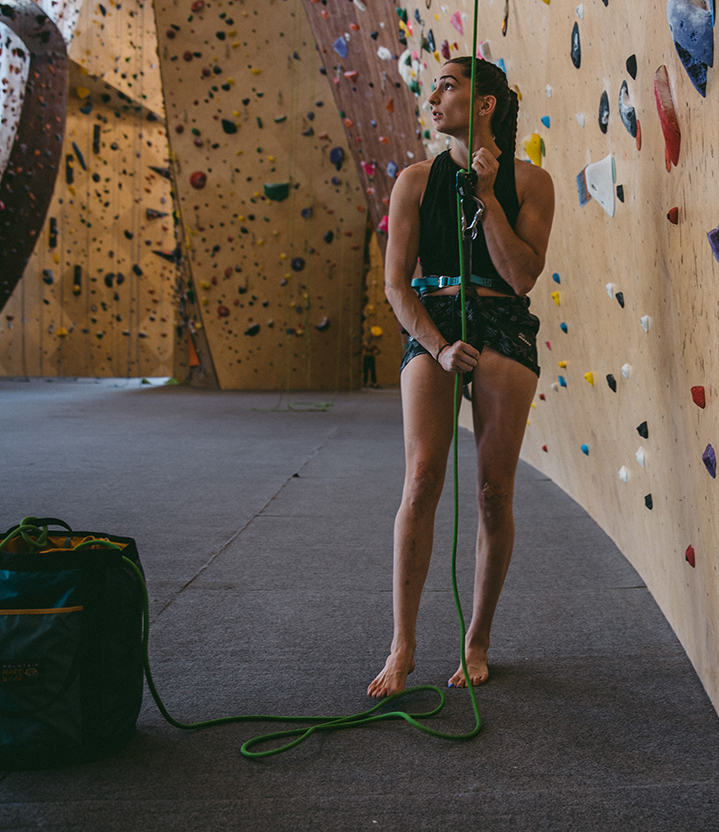 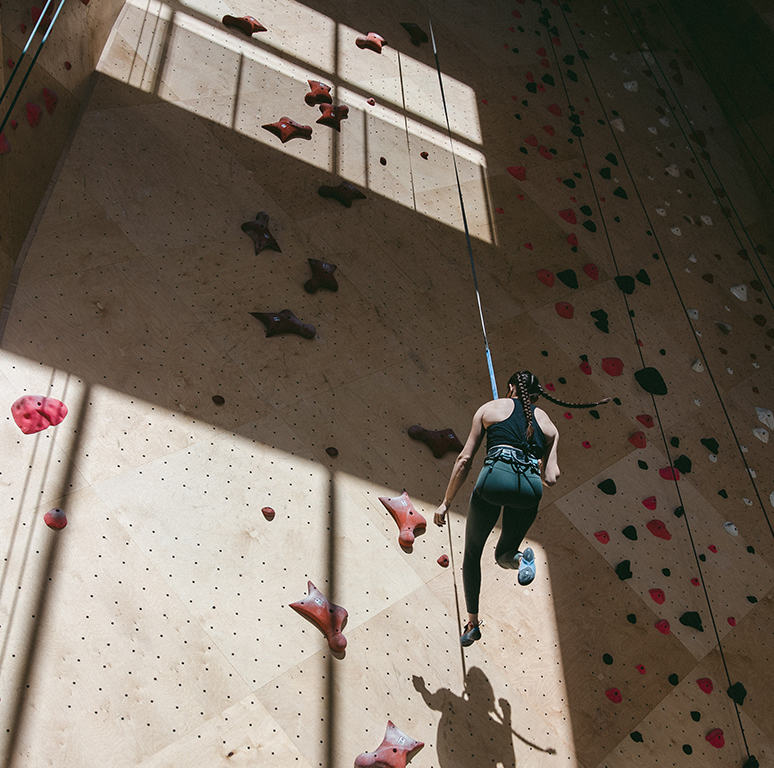 What are auto-belays, and how do they work?
If you get to the gym and want to climb routes, but don’t have a partner, many climbing gyms nowadays have a few routes that are equipped with what’s called an “auto-belay.” This consists of a big device installed at the top of the wall, from which a long sling extends and is attached at the bottom of the wall with a carabiner.

You can attach the carabiner to the center loop of your harness, and as you start climbing, the device takes up the slack on the sling above you. When you reach the top of the wall, or if you fall, the device automatically catches you and slowly lowers you to the ground.
What does gym etiquette look like?
ON ROUTE:
Be mindful of how much time you’re spending on a route or a boulder. There might be other people that want to try it, too. Take your turn and give others a chance before you try again.

Monitor your voice. Limiting your conversation to safety commands is important so you and your partner (and everyone else in the gym) can communicate effectively.
NAVIGATING THE GYM FLOOR:
Make sure that you’re not taking over too much floor space with your stuff and that you are not in the way of someone else, climbing or belaying, when you walk around or you stand somewhere. This is a matter of safety but also of respecting each other’s space.
WHILE BELAYING:
Stay focused on your climber. There are often many potential distractions happening around you, but it’s important to keep your eyes up while they’re climbing.

Don’t talk to your climber unnecessarily. If you do, say, for cheering, you don’t need to be extra loud. If you feel the need to give “beta,” or information about a climb, make sure that your climber wants it.
IF USING THE GYM’S EQUIPMENT:
Again, don’t take it over forever, especially if there are people around who seem like they might want to use that equipment, too. Leave it clean, organized, and in good shape. You know: “leave it the way you found it,” or even better!
What are some milestones to build up to? 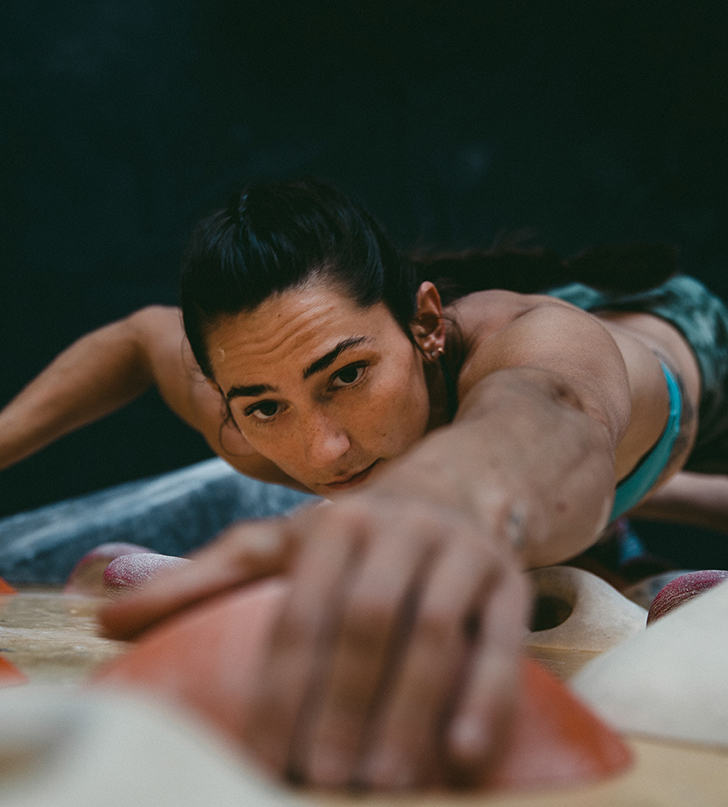 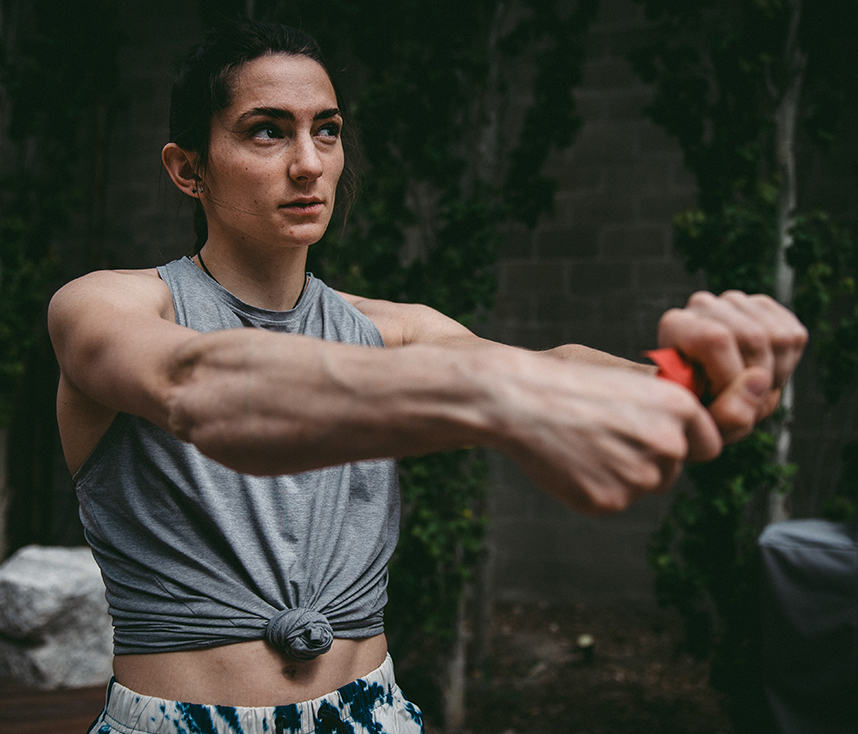 FROM KYRA:
“Grades can get in your head, but they are a really good milestone for progress in climbing. Otherwise, progress in climbing is pretty amorphous. It’s kind of like weight lifting: you get to see how heavy you lifted one day compared to the next day. In climbing, you can’t always be certain that you’re climbing ‘harder’ one day versus the next, but grades give a pretty good arbitrary mark of that. Making goals around which grade you climb is a really good way to mark your success and track your progress.”
FROM JOSH:
“If you want to keep progressing, prevent injury by listening to your body. The most common injuries in climbing are in shoulders and fingers, so make sure they are warmed up.” 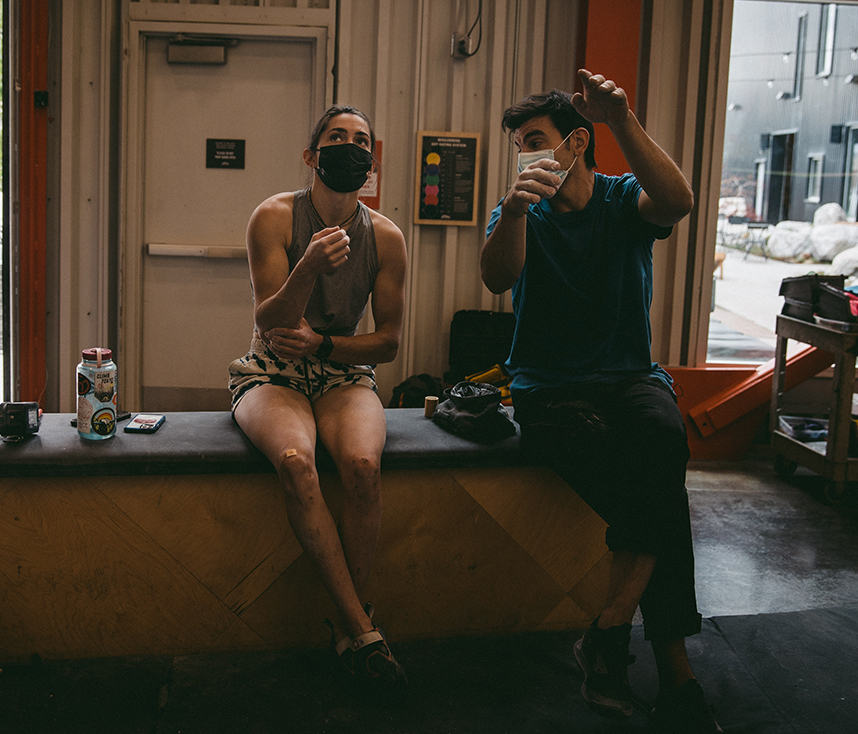 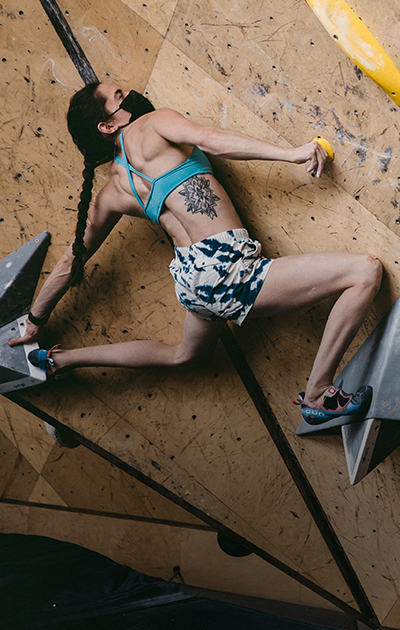 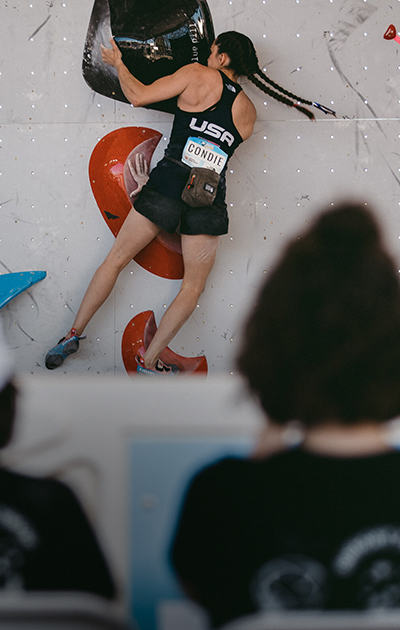 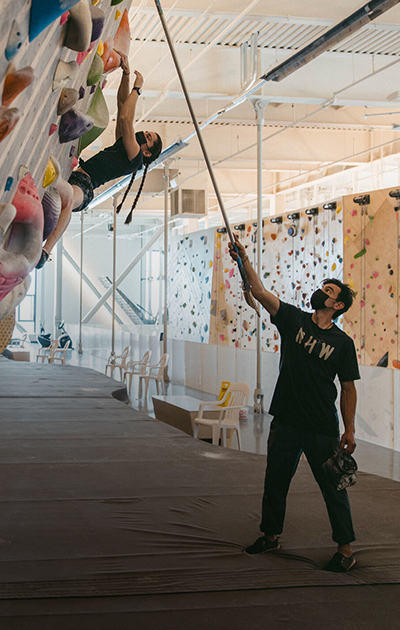 Advice From a Coach
on Giving Advice 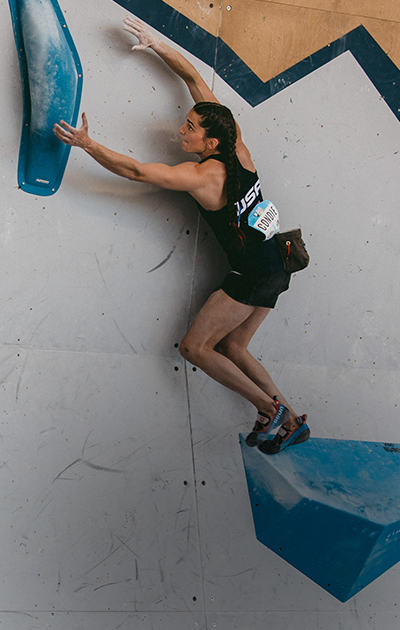