THINK BACK TO WHEN YOU FIRST STARTED CLIMBING. Think back to when you first started climbing. It was a blissful time when all you had to do was show up at the gym, try whatever routes the setters put up, and enjoy drastic improvement with each session. The progress was addictive and probably kept you coming back for more. But eventually, maybe a couple months or a year in, you stopped getting better. You kept going to the gym like before, but you just weren’t seeing the gains you once did. The dreaded plateau is a rite of passage for every climber, that point in your climbing career where just climbing isn’t enough to get better. Even veteran climbers experience plateaus that have them stuck at the same level for years.

Climbing-specific training is the answer, but do the smallest bit of searching online and you might end up more confused than when you started. Here’s the secret: The only thing that matters is consistency. (Well, and not getting injured.) It almost doesn’t matter what you do when it comes to training, how many sets/reps, how much weight, as long as you are consistent, you will see improvement. That means finding a weekly routine that works for you and sticking to it. Three of the best tools to target climbing-specific fitness are the hangboard, the campus board, and the MoonBoard. Below we explain the basics of how each tool works, what it targets, and how to incorporate all of them into your training routine. We tapped training aficionados Anna Liina Laitinen and Kyra Condie to give us their best advice for training, whether you’re just starting out or you’re a seasoned pro like them.
WARM UP + CLIMB

Warming up and climbing should always be essential parts of every full session. Never just hop on the hangboard or campus board without fully warming up, meaning doing some easier climbing and hangs to make sure your shoulders and fingers are fully ready to go. Warming up should be 15 to 20 minutes or more, starting off easy and slowly ramping up. Laitinen likes to do light cardio, shoulder work with an exercise band, and dynamic pullups to get her power warmed up, then she stretches in between climbing workouts. She tailors the climbing and training portions of her session to be focused on power, strength, or endurance for each day. Then she has one day per week where she does them all. For example, if she’s trying to get stronger, her weekly workout breakdown might be structured like this: power 25%, strength 50%, endurance 25%.

“The majority of my sessions are still just climbing,” Condie says. “I finish my warm-up and always do my training (campus board/hangboard) immediately after. I think it’s important to do at the beginning of the session. You’ll see the most improvement and have a better chance of not getting injured.” She spends an hour each session doing some sort of exercise, whether it’s hangboard, campus board, or climbing that targets power-endurance or endurance. After this hour-long exercise, then she climbs hard problems and routes. 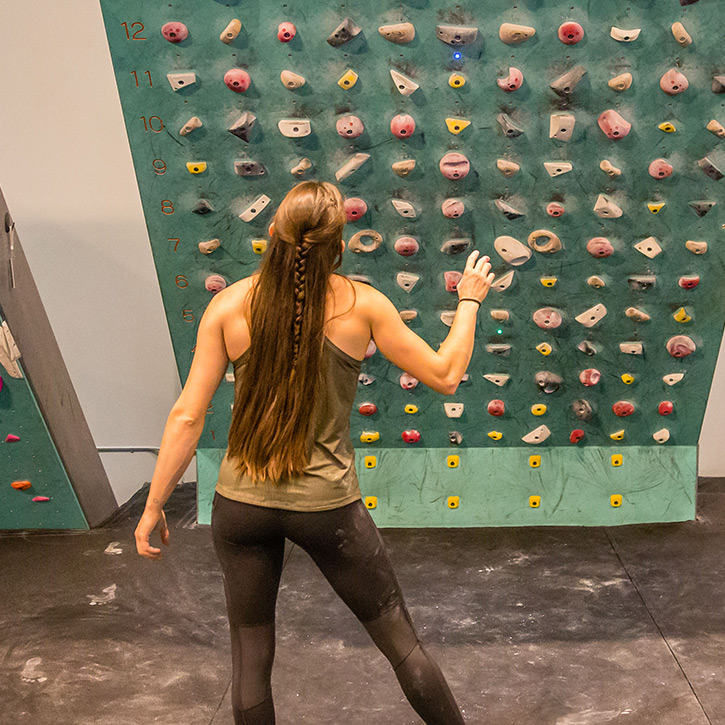 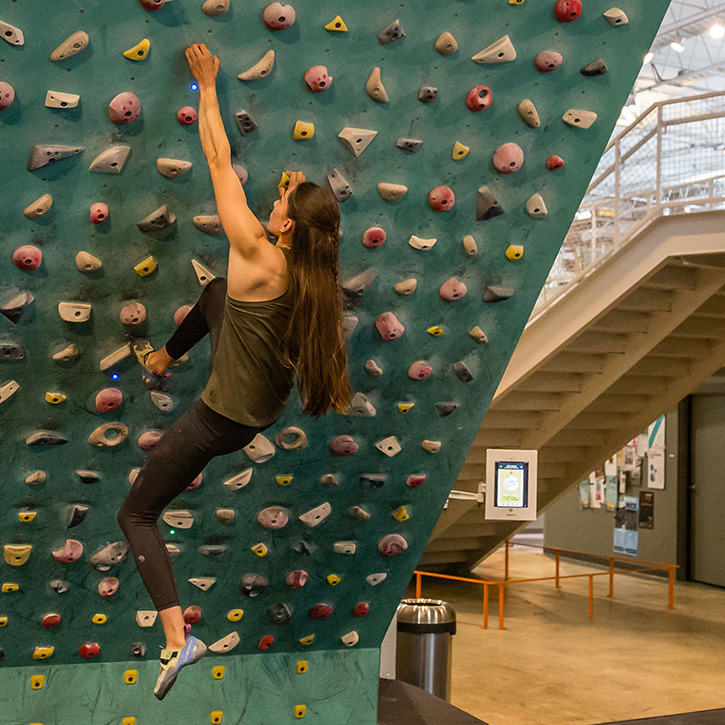 WHEN SHOULD YOU START CLIMBING TRAINING?
These training tools can be very hard on your fingers, elbows, and shoulders, so it’s important to have a base level of climbing fitness and finger strength before you use them. A general guideline is to climb regularly for at least a year before using these tools. When you start hangboarding, start off really light (big holds, no weight) and see how it feels. For campusing, Condie recommends that you should be able to climb solid V6 or V7 (about 5.12 in sport) before you try it. When you start, use the foot rails below the board and the largest rung to get your body used to the motion and loading of the joints.

A small board made of plastic or wood that has a variety of hold types and sizes, which can include jugs, slopers, edges, pockets, and crimps. There are dozens of different boards made by various manufacturers, each with its own set of holds. The board is usually mounted on the wall, but some travel options can be hung on a tree or other hook. The idea is to hang on holds without using your feet to isolate finger strength. By standardizing the amount of time you hang, amount of time you rest, numbers of reps and sets, and the holds you use, you’ll see gains in finger strength. Make it harder by using more challenging holds, hanging with weight, or adjusting the hang and rest times. The danger with hangboarding is that it’s easy to injure yourself if you go too hard too fast. You want to start off light and slowly build your training. Proper form is also important: Don’t just hang straight-armed on your skeleton. Keep the head looking forward in a neutral position, engage the shoulder blades by squeezing them together, and have a slight bend in the elbow.

Condie says if you can only do one thing in addition to climbing, you should hangboard. “With limited time, you can see the most improvement,” she says. “But you gotta work up to it—no finger injuries! And never do it multiple days in a row.”

“My favorite is to train my max finger strength by adding weights. I hang 8 to 12 seconds on a 15mm edge, rest for 3 minutes, and repeat it 5 times.”

“My favorite is one-arm hangs, which are definitely more advanced. To work up to this you can do assisted one-arm hangs by taking weight off. I personally find them more applicable than weighted hangs with two arms because they include shoulder stabilization that you don’t get with two arm hangs. Doing these has been the single most applicable thing I’ve ever done in my training. It doesn’t take much time, it is available at almost any gym, and you can see the results.”

This is a slightly overhanging board with wooden rungs set in a ladderlike structure, each one a specific distance from each other. Often boards will have a few rows with rungs of varying sizes, but within each vertical row, all rungs are the same size. The idea is to campus between these rungs, meaning climb between them without using your feet. Since this is a very advanced move, most campus boards have small foot rails or holds placed on the wall below for some assistance starting out. Each rung is numbered, with the bottom rung being 1, and workouts are listed in reference to which rungs you hit. The bigger difference between numbers, the bigger and harder the move. The campus board is all about power and contact strength. “Power is the result of strength and speed,” Laitinen says. “It’s the snap [of climbing moves.]” Any time you have to do a big or dynamic move, you’re utilizing power, and it’s especially crucial in bouldering. Contact strength is your ability to latch a hold when you first touch it. Think about making a huge move to a jug, then think about that same move, but this time to a small crimp. Holding the crimp when you first hit it requires more contact strength. Besides increasing your actual fitness in these areas, i.e., developing your muscles, campusing also improves your mental approach when it comes to being able to do big moves.

“I have an Instagram post from December 2018 outlining my whole workout, but my two favorites are big move pull-throughs (advanced is 1-5-8/1-5-9) and snatches. With big move pull-throughs, you do as big of a move as you can and then pull through as far as you can, before reaching to the next hold. Snatches are one-hand jumps to the campus rung and pulling through to a higher rung. Very good for contact strength.”

TARGETS: COMBINES FINGER STRENGTH AND POWER AND APPLIES THEM TO CLIMBING

Developed in 2004 by British climber Ben Moon, the MoonBoard is a mini climbing wall made of a flat panel that’s eight feet wide and 12 feet tall, set at a 40° overhang. It has a particular set of holds, each with a standardized location and orientation. You make up difficult boulder problems by picking certain holds to use for your hands and feet. Because MoonBoards around the world are the same size, angle, and have the same holds, you can climb the same problems on any MoonBoard. Modern boards have LED lighting systems and a corresponding app, so you can virtually share problems, log your progress, and try the 55,000-plus climbs that exist on the app, with more being added almost every day.

There’s no way around it—the MoonBoard is hard. Because it’s one flat panel that’s really steep and most of the holds are not good, it’s all about pure strength and power. There is really no movement technique involved; you can’t use any trickery, heel hooks, or other nuanced beta to complete a problem. Often you’re making big moves to bad holds with inconvenient feet, which you must cut from the board, control the swing, and set up for the next move. The holds don’t change, so you can keep coming back to the same problems year after year, using them as benchmarks to track your overall climbing progress. The problems in the app range from V4 to V14, but the V4s aren’t typical V4s you’ll find in the gym. MoonBoard climbs are very shoulder- and finger-intensive, and injuries are quite possible. Realistically you’ll need to climb V5 or V6 consistently before you start using the MoonBoard. The best part about this training tool is that it’s more like regular bouldering, where you can project problems with friends and not feel like you’re training. The MoonBoard might be very hard, but it’s also very fun!

“I prefer the MoonBoard overall, because I get to climb. I often find myself on the MoonBoard, just climbing hard problems and projecting like I would outside.”

“I like just trying climbs on the MoonBoard. I also like doing endurance with 50-move circuits. You can just grab any hold, and it’s going to be hard because none of the holds on the board are jugs.”

Core: If you don’t have much time, training core after climbing only takes 15 to 20 minutes. Endurance: Laps on a lead wall are excellent. Find a climb that’s hard for you and try to do it twice in a row.

Circuits: A great way to focus on power-endurance. Go for a number of moves on a bouldering wall, so 50 moves then rest. Then do it again. Time: If it’s a bouldering-only gym, build endurance by trying to stay on the wall for 5 to 10 minutes.

Pointers: While you’re on the bouldering wall, have someone point out holds to use, aiming for 70 to 90 moves total.