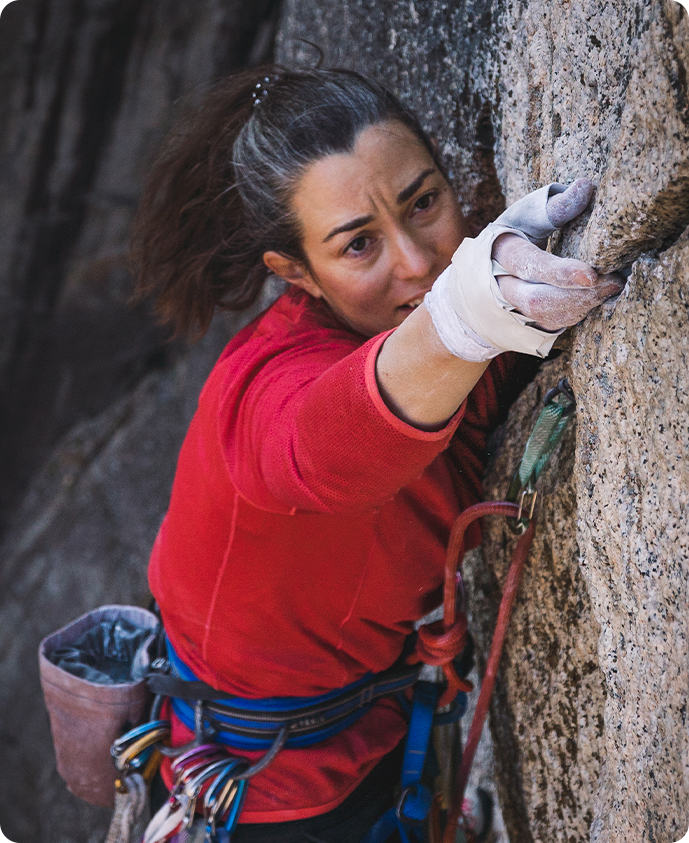 I am a 37-year-old climbing guide who has decided to get pregnant. If I had it my way, I would have waited another five years or so until I was completely ready. But this year, I accepted that I would never be completely ready to change my life forever. So, I decided to stop waiting for the perfect time to happen to me. That’s what being a guide is about: making decisions. And being a guide is what I know.
I have not had the easiest life, but I have had the best life I could possibly make for myself. Part of what has made my life so good is the challenges I’ve seen along the way. My life could have been so much easier had I chosen to take a different path. Instead, at every juncture or opportunity, I chose the rocky path.
Part of making my life more difficult is my need for paradox. I love and desire things that contradict each other in their very essence. I am fiercely independent and my independence is priceless to me, but at the same time, I would be nowhere without family or community. I crave stability, while at the same time, I want to throw that away to find my next adventure. I thrive in challenge–something that has worked in my favor as a climber and guide, but less so as someone trying to settle down.
Needless to say, I have lived on the fringe of culture and conformity for my entire adult life. In high school I tried so hard to fit in. The harder I tried the worse I was at it. My peers could likely see through my efforts and identify me as the fake that I was. A fake normal person. I started climbing at the gym in the year 2000 and finally felt like I fit in. And I was good at it. I wanted to be an athlete and was terrible at team sports, but climbing, I was meant for. 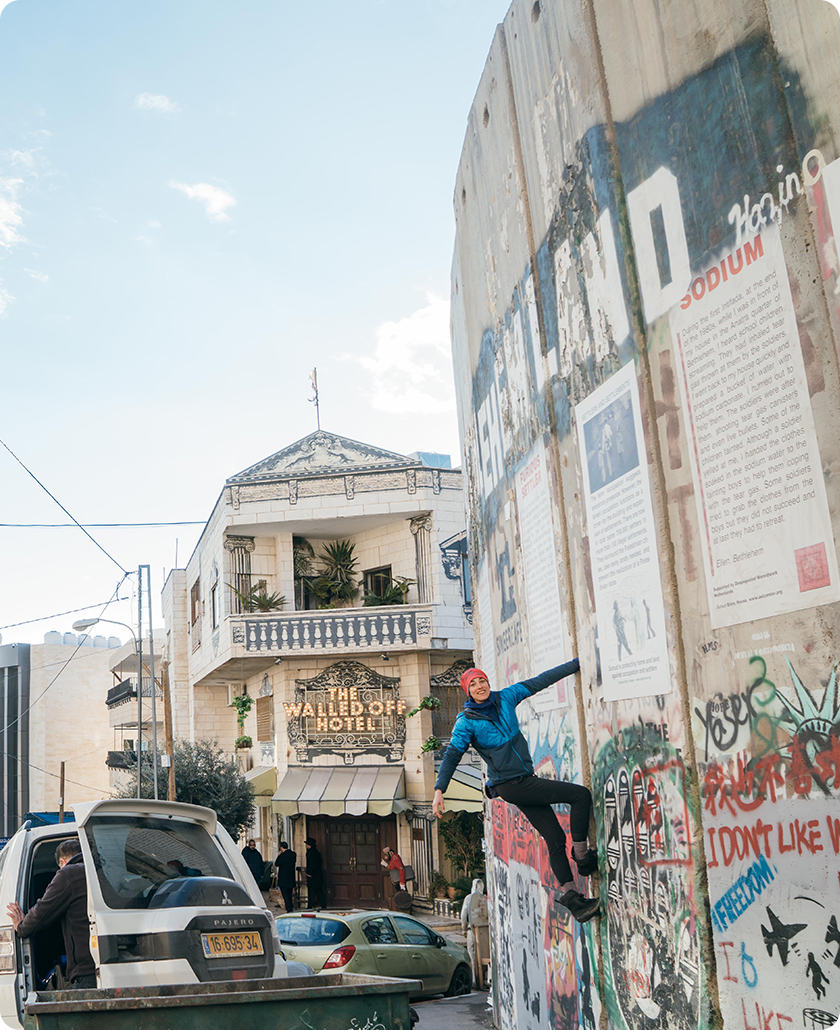 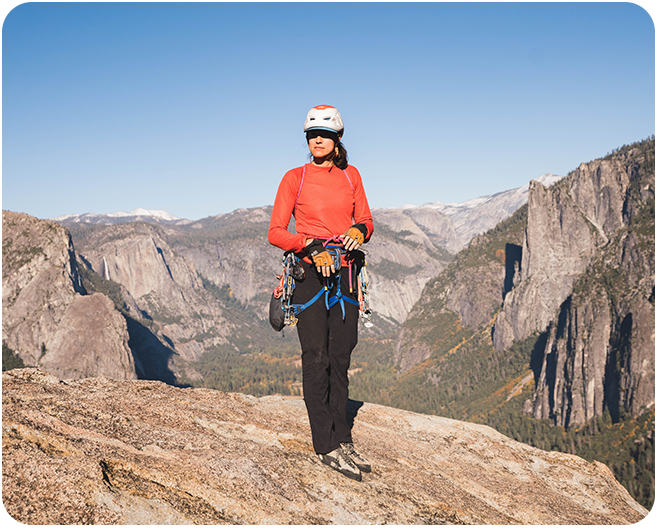 College was one of my last attempts at normalcy. I managed to stick with it long enough to get an undergraduate degree and rack up some sizable student loan debt. Instead of getting a job that would lead me to a career after graduating, I moved to Yosemite and got a job washing dishes at the Tuolumne Meadows Lodge.

I learned how to place a cam, drink water from a melting snow patch, read terrain and navigate adventures through the wilderness of the Sierra Nevada. Over several years, I worked my way from dishwasher to climbing guide.

This started my seasonal lifestyle. Each year I would work for a few months during Yosemite’s busy season, and at the end of every season, I’d pack up my van and travel. I went all over the U.S. and all over the world. I always traveled to climb. In my eyes, climbing and the climbing community gave me a worldwide safety net. One in which I could go to new places, make new friends, climb new routes, and always have a purpose. 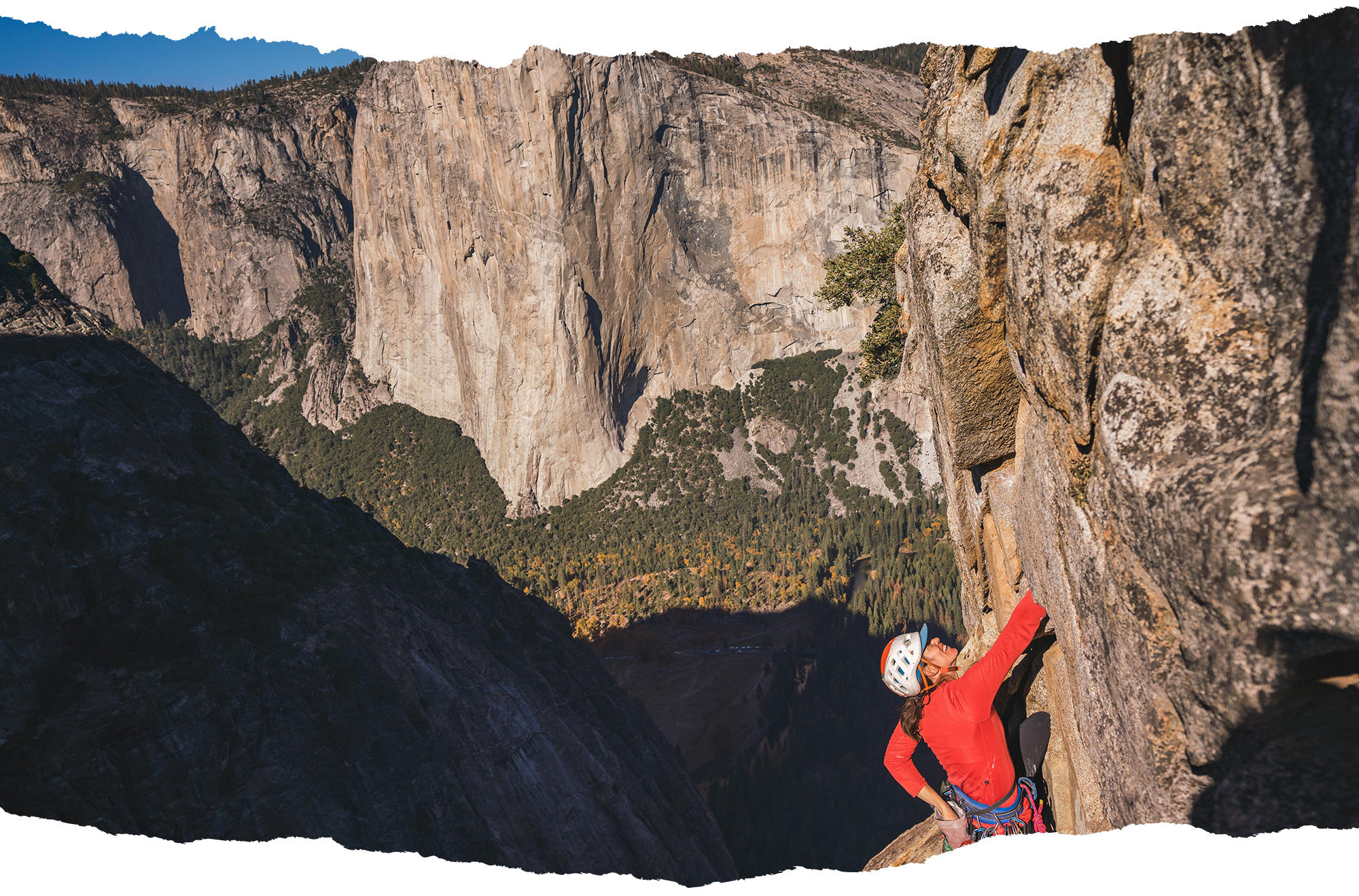 I continued to come back to Yosemite–the center of my universe–and I probably always will. There, I can find community, work, stability, and easy access to hard climbing. Yosemite is the mothership, and I have yet to wean myself from her teat.

My confidence and strong decision-making abilities have always helped me as a climbing guide. In an industry dominated by overly confident men and in a place run by old white guys, I did not fit the mold of your typical climbing guide. My abilities and experience as a climber has given me confidence, and my confidence has allowed me to make strong decisions. These abilities have helped me tremendously as a climbing guide and in life. They also helped me to make the biggest decision of my life.
Around the age of 35, I decided that having a kid would be my biggest adventure yet. I had thought about having kids my whole life, always sitting precariously upon a fence about whether or not I should actually do it. I knew that in order to start a family, I would have to check some things off of my list. While most aspiring parents likely have things on their to-do lists like finding a stable year-round job with health benefits, building good credit, and buying a house, my list included things like: free climbing El Capitan, first ascents in Patagonia, and climbing in the Middle East. 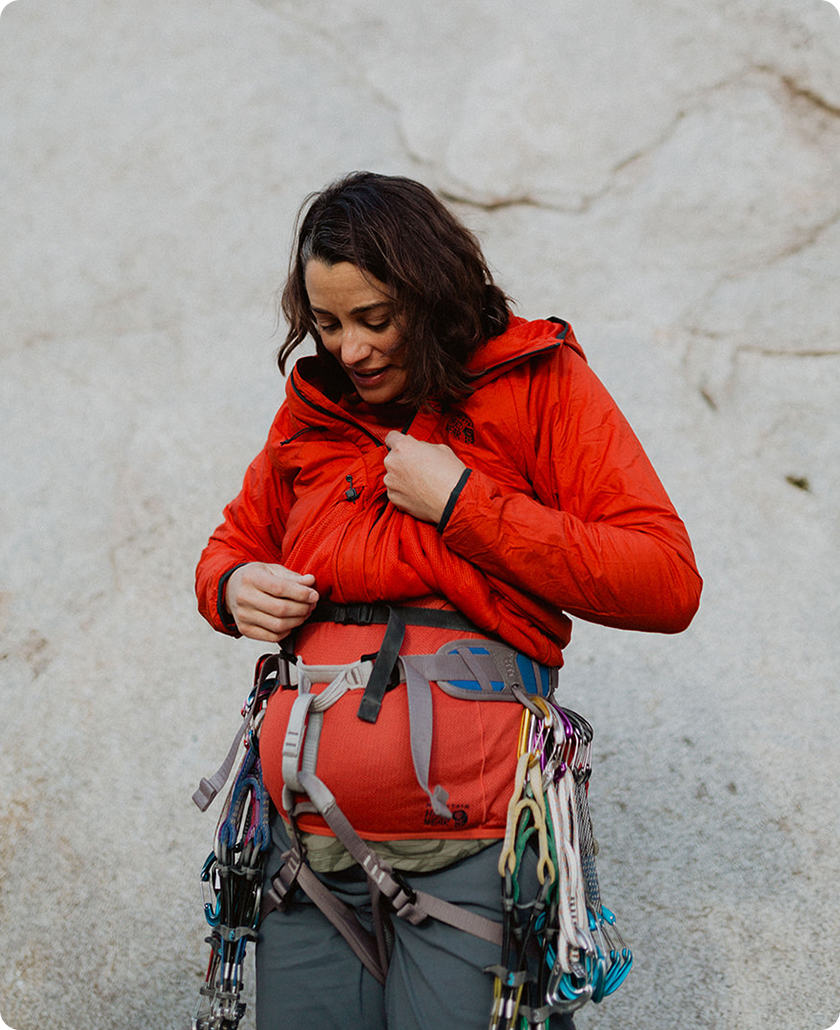 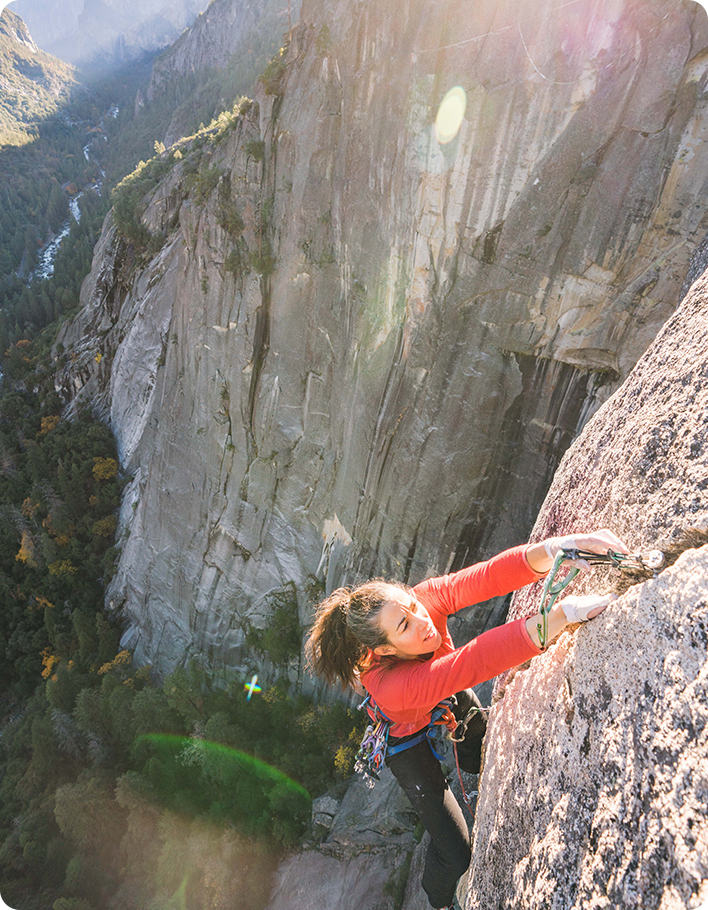 But as I accomplished the goals on my list, my tick list continued to grow. I realized that I would always have a list of climbing goals my whole life, but my goal of having a kid had a more serious biological time limit. Having kids did not mean I had to give up my climbing goals but endlessly pursuing climbing goals might keep me from having kids.

After working hard to save some money for a few years, I finally felt a sense of stability with my partner. Andrew was just as excited as I was about having a kid and has offered me endless support throughout our relationship. We felt ready to embark on this adventure together.

After months of trying and failing to conceive, I decided that it was for the best and that since I loved my life just how it was, I was better off not having a kid. Upon accepting this, I realized my period was late. I took a pregnancy test, and we learned that we had done it.

I was immediately filled with fear and anxiety for the future. Instead of worrying about money, childcare, college tuition, or climate change like most parents, I was overcome with anxiety about losing myself and my identity to this child. I worried about the fact that the amazing life I had created for myself would disappear forever. I know that everyone’s life changes when they have a kid. But as an almost middle aged climbing guide, living for months on end in my converted minivan, I knew that my life would have to change a lot more than most peoples in order to accommodate a child.
If I lost my identity as a climber and a climbing guide, who would I be? After years of living an alternative lifestyle, I felt accepted in a community that normalized working seasonally and living in a van. I was comfortable, and more importantly, knew my place in the world. But I knew very few female climbing guides living this way with children.

Climbing and guiding is not only my work and passion, it defines who I am as a person. I worry that without them, I would lose the abilities that got me where I am today…
This Mother’s Day is significant for me because it will be the last Mothers day that I will appreciate my mom and moms everywhere without truly knowing the sacrifices they have made. Our society’s expectations for mothers exceed that of any other person. Oftentimes mothers are expected to work full-time while also doing most of the work in child-rearing. During the pandemic, many women were forced to give up their own careers in order to stay home with their kids. Due to the gender pay gap, this made economical sense for many families. 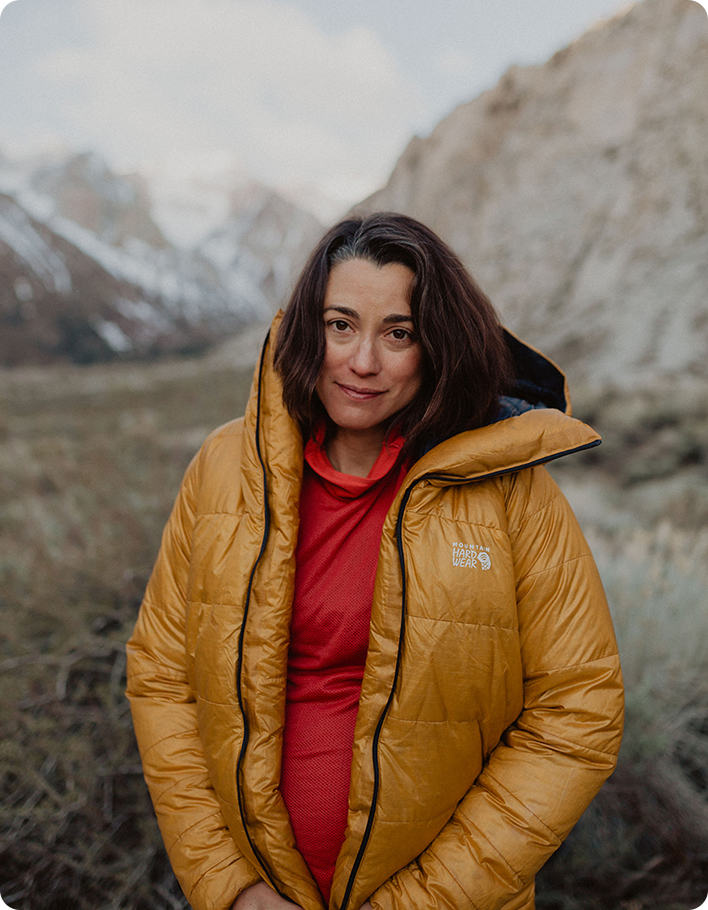 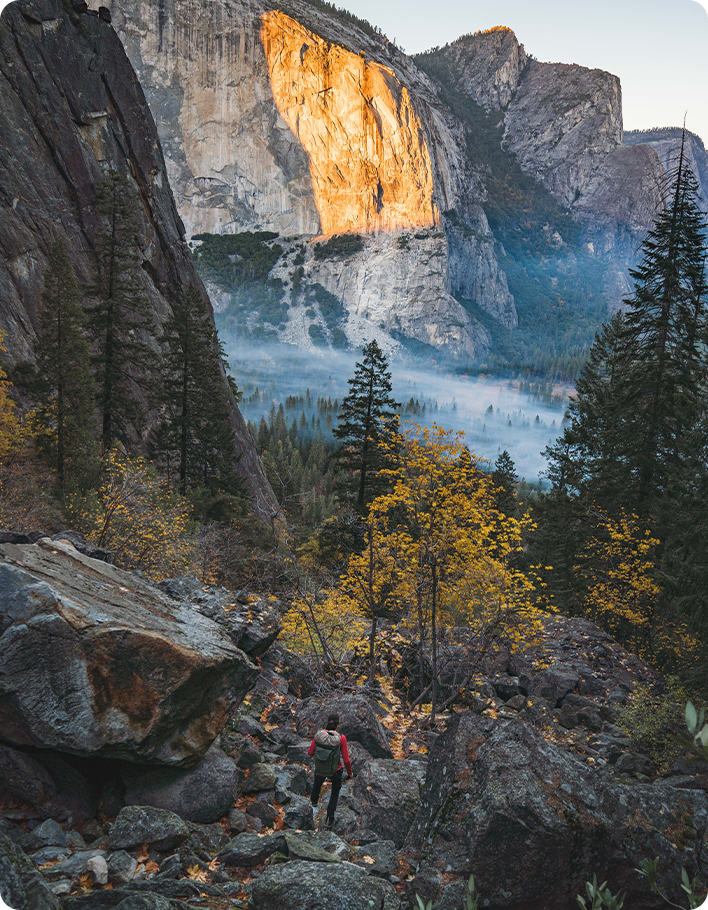 In my own line of work, I have known quite a few men who have become fathers without interruption to their careers as guides, but I can not say the same for most of the female guides I have met.

Now that I am getting ready to be one, I am worried that our society has unrealistic expectations for mothers, that mothers are expected to give up more of themselves than their male counterparts typically are. That by taking too much time for themselves or pursuing their passions (if they are able to) mothers might be more likely to be considered selfish.

Experienced parents say that everything will change once I have a kid. I don’t doubt them. But will everything change so much that I no longer feel the need to follow my passion of climbing to the ends of the earth? The same passion that has given me so much, including my life purpose, a priceless wealth of experience, my most valuable skills, and my cherished identity as a human. I have trouble envisioning a world where this is the case. 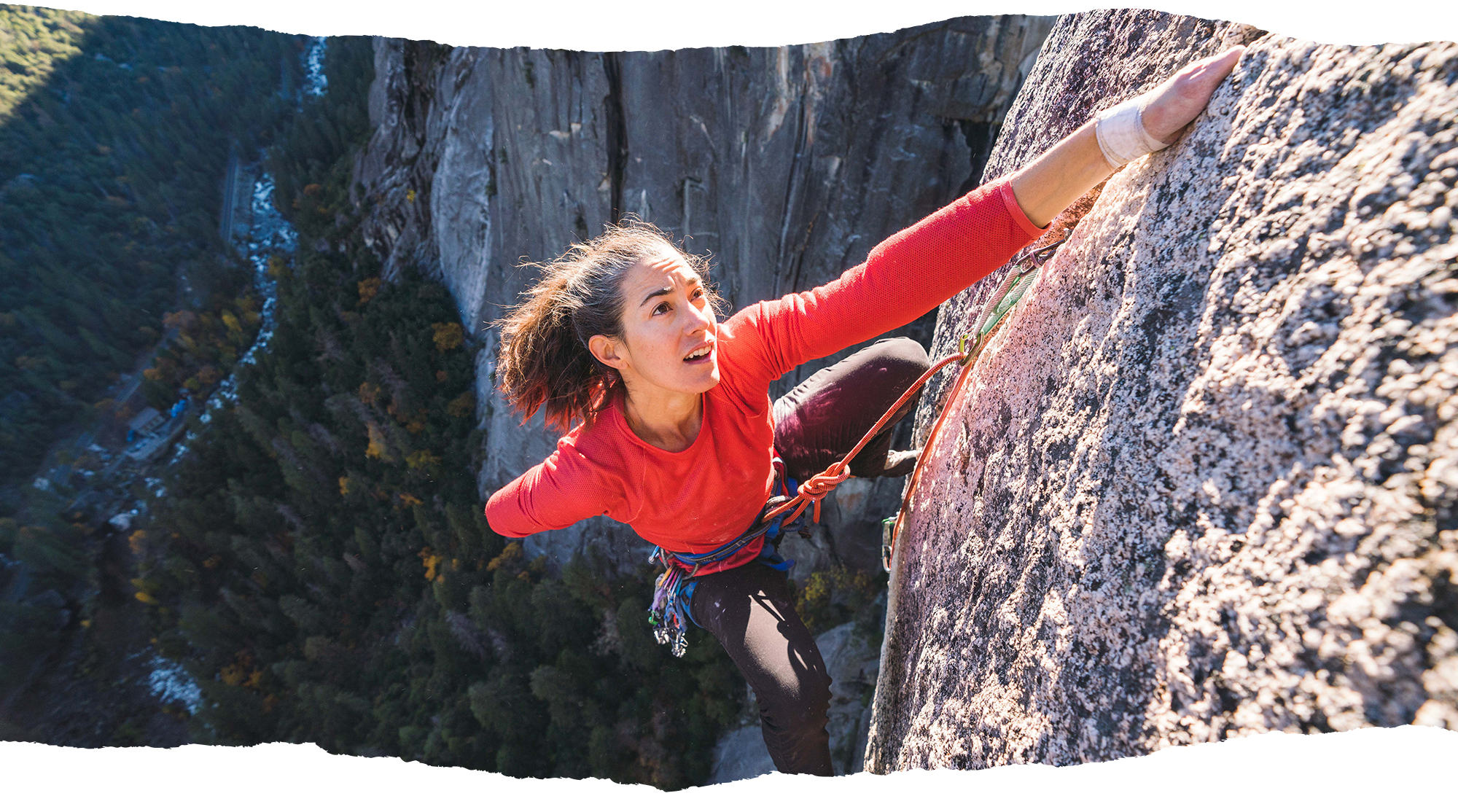 Perhaps a shifting of goals is in order. Rather than seeing my transition into parenthood as a career-ending event, I can use it as a way to transition from guiding mostly multi-pitch climbs to expanding my passion for teaching and sharing my knowledge with clients in order to help them achieve their climbing goals. 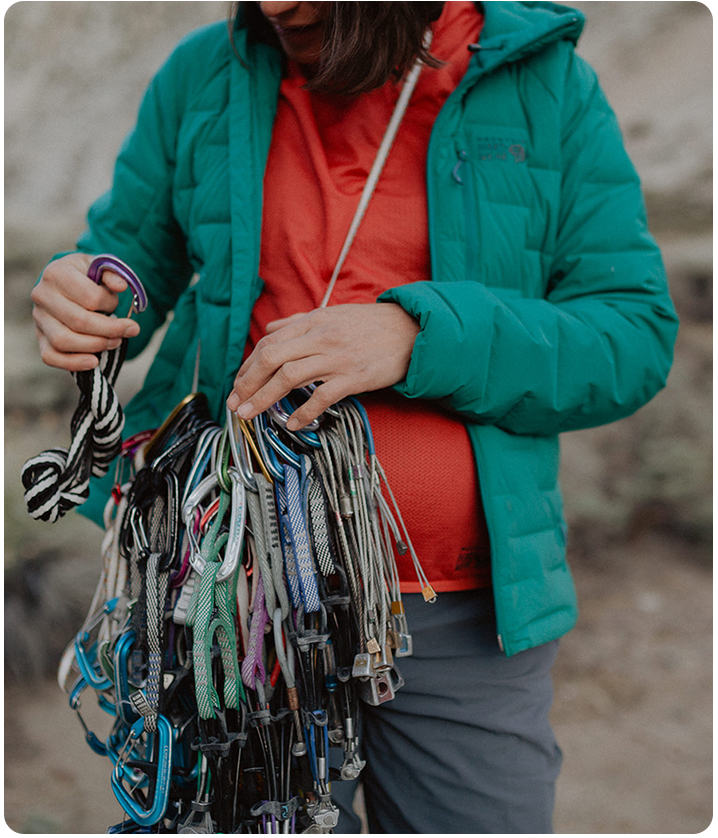 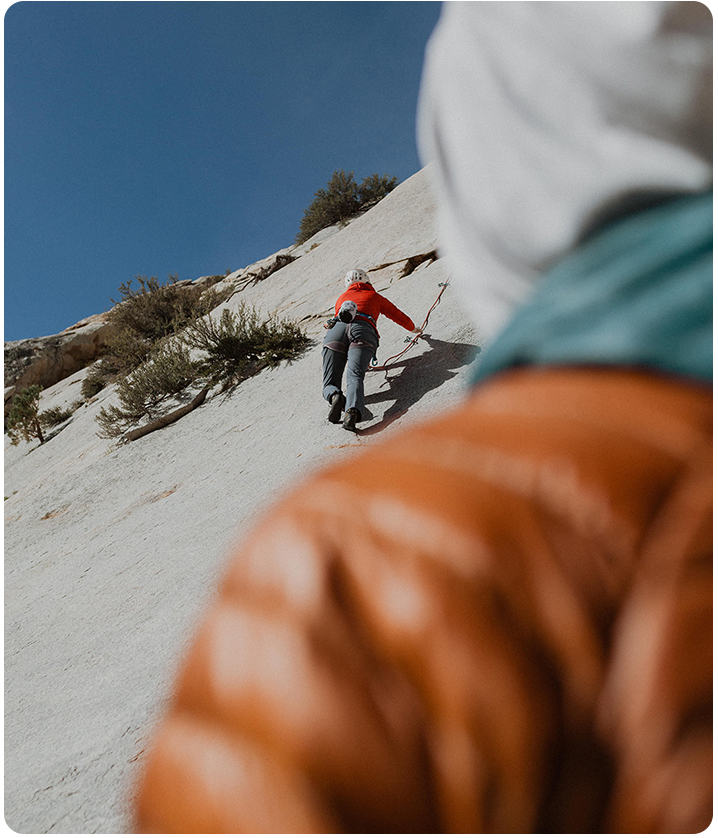 Guiding is not only a job that I love, it's one of the only ways I can make money. I may have to take a brief break from guiding clients up long and adventurous climbs, but I can divert my focus to teaching climbing classes and making climbing more accessible.

Of course I will have to shift my own climbing goals, as well. My tick list of climbing goals is still long. But as a parent, some items are more attainable than others.

Instead of focusing my efforts on long and adventurous climbs that require endurance and knowledge of technical terrain, I can try shorter climbs that require more physical power and strength. Instead of the mental challenge of reading a route and the adventure of variability in terrain, I can enjoy the mental challenge of projecting a hard grade, of seeing progress in the miniscule improvements and appreciating the adventure of not knowing what I’m capable of.

Trying shorter routes will allow me to enjoy a challenge without leaving my little one for more than a few hours. To prepare for these routes I can train my body with weights, hangboards, and my home climbing wall. The challenge will be in making time between feedings and during naps to squeeze in training sessions.
I know that becoming a mom is not an easy journey for anyone but I hope I can thrive in this challenge. Given my place in life and the support of my partner, I know that it is a challenge I can handle. I realize that for mothers who are less privileged than me, raising a child and continuing to pursue their passions and careers is an impossible fantasy.
This Mother’s Day, I will honor mothers everywhere, my mother and all the mother’s before her, who may not have had that privilege, by vowing to continue to follow my passion and hold tight to my identity as a climber, guide and soon-to-be mother. 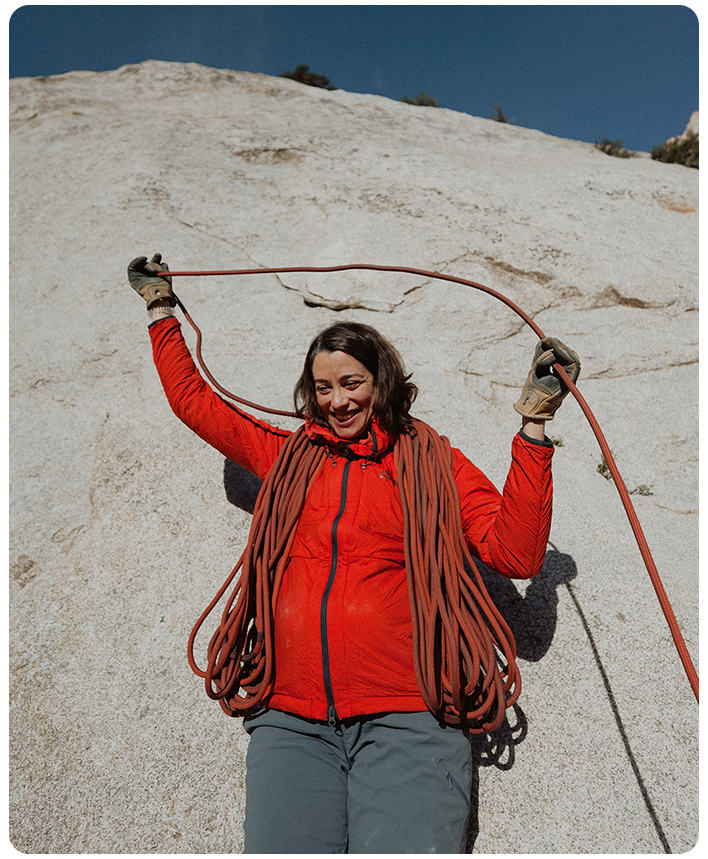 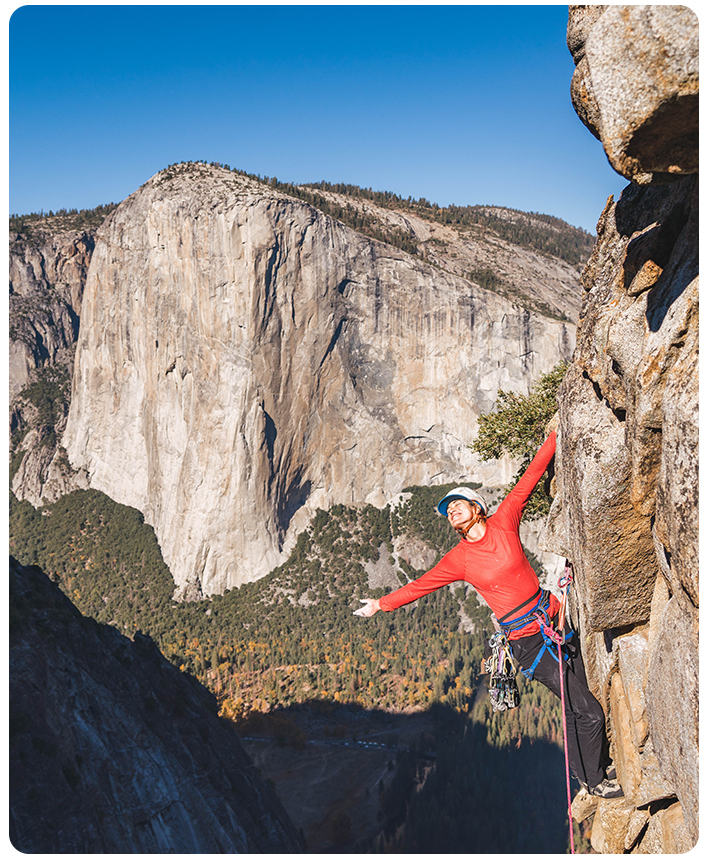 I vow to enjoy the challenge of juggling time with my baby with time for myself. I vow to set a new precedent for mom’s everywhere, to put ourselves, our life goals and passions first (if possible), in order to be better role models and mothers to our children.
I vow to see my mother as so much more than just my mom, but as an independent, self-defined, powerful woman, with her own concerns, goals, and identity that does not concern me or my brother. As much as I want to believe that my mother’s world revolves around me, I must remember that I am just a part of my mother’s world, and I am here because of her. I am a branch to her tree. Although her tree would not be the same without that new branch, that branch makes up only one small part of who that tree is.
Genevive climbing
Finding Balance
Off the Scale
LEARN MORE
Page generated at: Fri Jul 01 2022 07:03:37 GMT-0000 (GMT)
Remove Product?