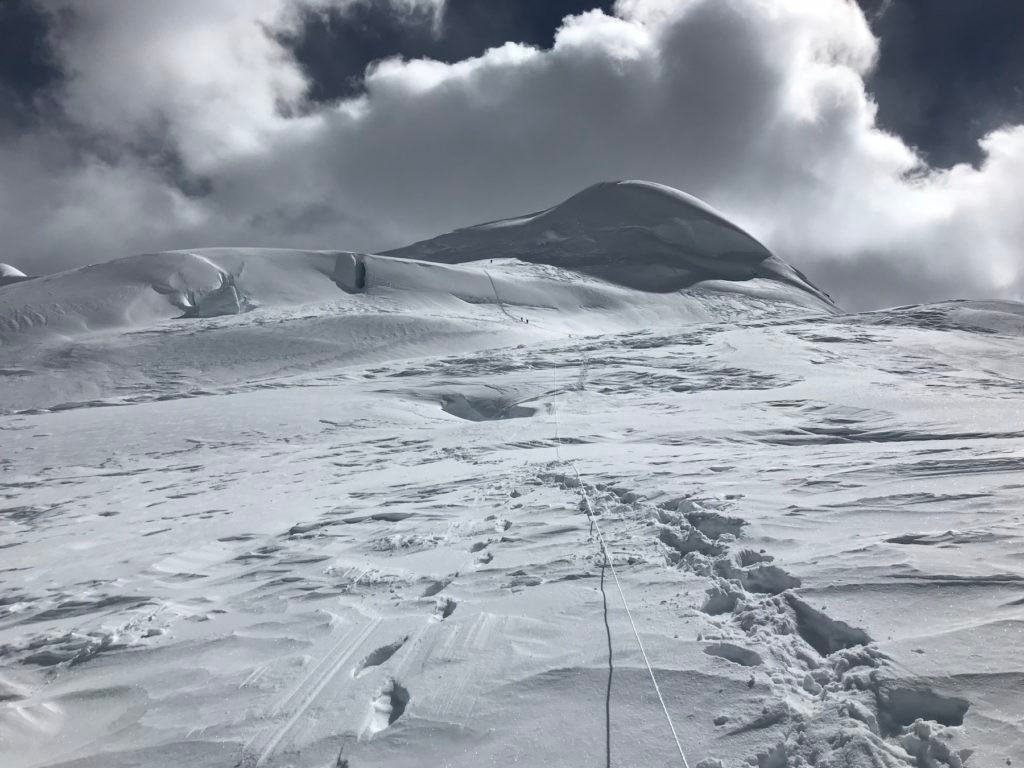 The following is a dispatch from Mountain Hardwear athlete, Garrett Madison, sent on November 4, the day after his team completed a first ascent in the Nepal Himalayas.

Yesterday at 9:15 AM the Madison Mountaineering team reached the top of the Unclimbed Peak, Tharke Khang, located in the Nepal Himalayas near Mount Everest at over 22,000′ (6670m). We began our summit day just after midnight on November 3rd, and departed our high camp (19,200′ / 5820m) on the Nup La glacier near the China – Nepal border at 2 AM.

This was the culmination of more than a year’s planning, we were anxiously anticipating what the route to the summit would entail, and wondering if we would be able to ascend to the top of a peak that no climbers had yet attempted before us. Although seemingly doable in our eyes from google earth and helicopter reconnaissance, we expected the route would likely have some unexpected challenges in store for us, perhaps preventing us from reaching the summit. 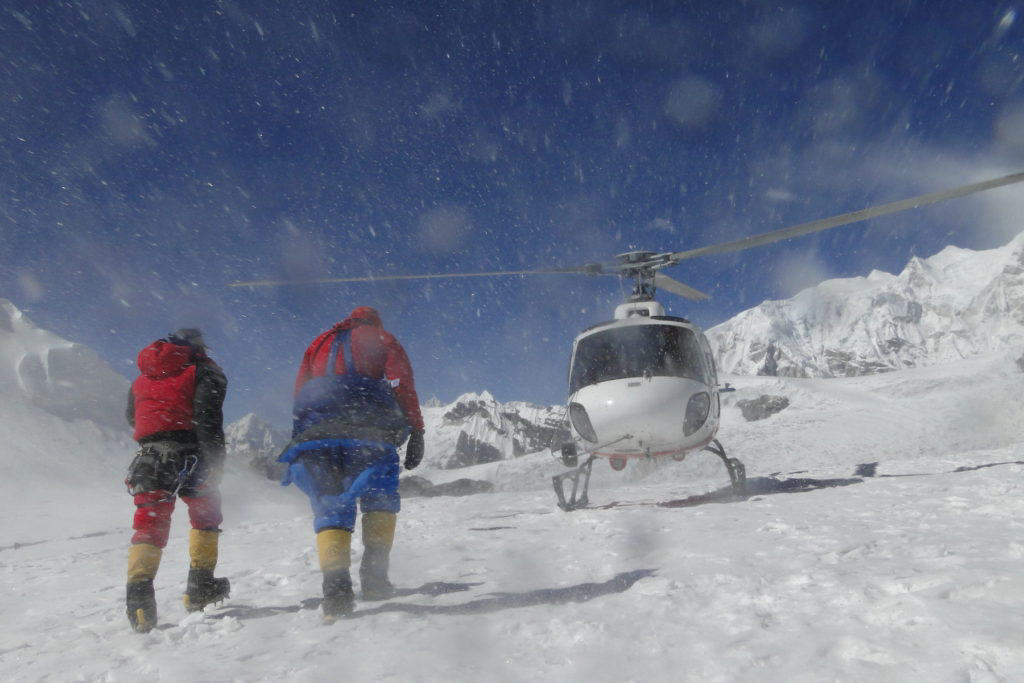 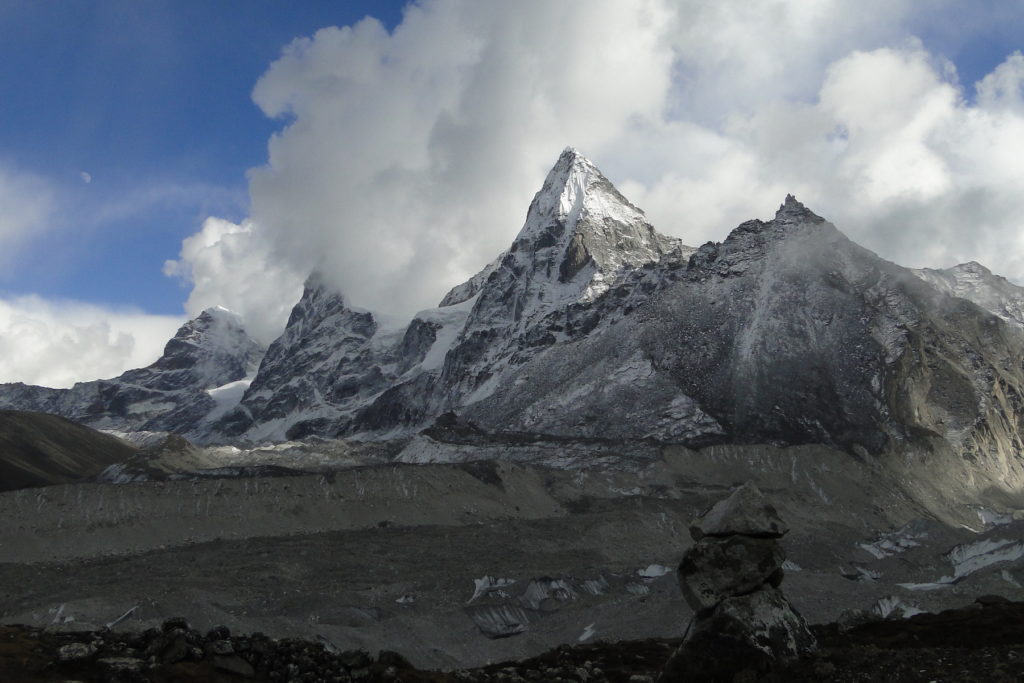 From our high camp we traversed the Nup La glacier 45 minutes to the North Face of the peak, ascending a firm 45 degree snow slope about 500 ft. up to the ridge line, breaking through the corniced ridge, then ascending the ridge through varying degrees of steepness, sometimes vertical for sustained portions. Over the previous 2 days our team had ascended about two thirds of the route and placed fixed ropes over the steep and exposed sections, however the remaining 1/3 of the route to the summit was still unclimbed and our plan was to find and establish this portion of the route as we climbed on our final summit push, in a ‘make or break’ style. 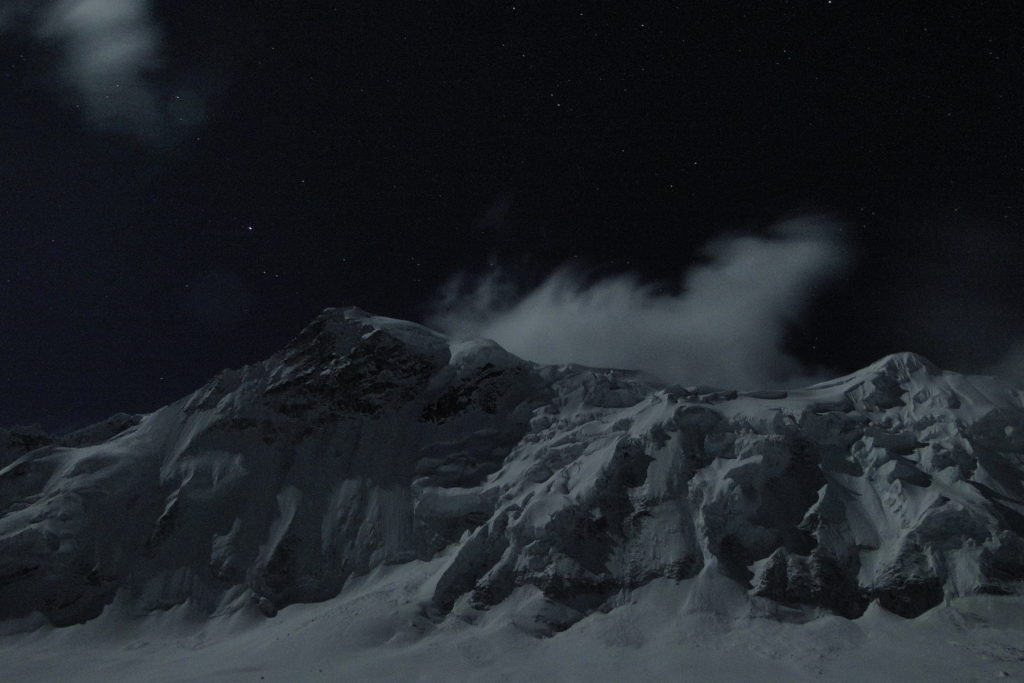 As our team ascended the route in the very cold and dark night, we were divided into two groups. The first group was focused on climbing ahead and fixing (problem solving) the remaining portion of the route and the second group was making steady progress towards the goal of reaching the top. I climbed with my friends Aang Phurba and Lakpa Dandi Sherpa, Aang Phurba led the final steep pitches to the ridge just before the highest point on the peak. Aang Phurba and I have climbed together many times in recent years on Mount Everest, K2, Lhotse, etc. His brother was part of my team in 2014 on Mount Everest and perished tragically during the avalanche in the Khumbu Icefall on April 18th that ended the climbing season for us, Aang Phurba and I have a special bond that goes beyond the singular focus of climbing. 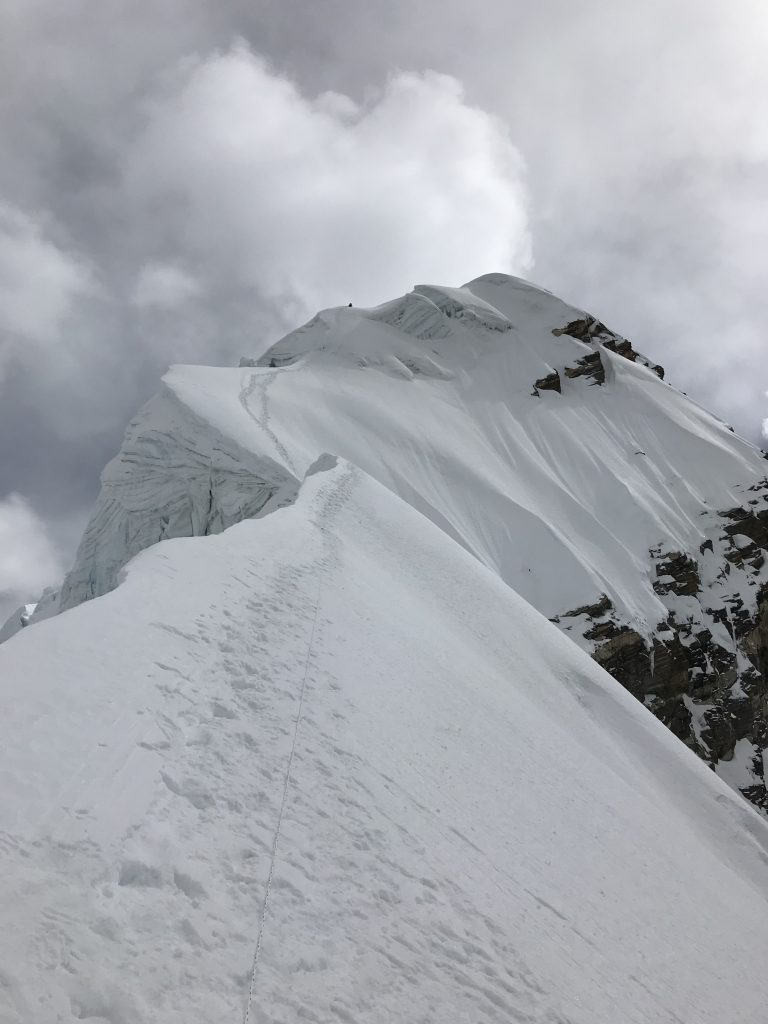 Before reaching the summit, Lakpa Dandi and I climbed up to join Aang Phurba just below the highest point on the peak, unfurled some prayer flags and silk Khata scarves, anchoring them near the top where they would float in the breeze, then together walked the final steps to the highest point and true summit of Tharke Khang. We could not have had a better day for climbing in the Himalayas, there was not a cloud in the sky and only a small breath of wind. We gazed upon Mount Everest, Mount Lhotse, Mount Cho Oyu, and many other of the surrounding Himalayan peaks. Shortly thereafter, a few of our other climbers ascended to the summit and reveled in the majesty of this spectacular mountain range on such a glorious day. After savoring our time at the summit, we began our descent down the ridge, a series of rappels over exposed terrain, where often both sides of the ridge dropped away into nothingness. 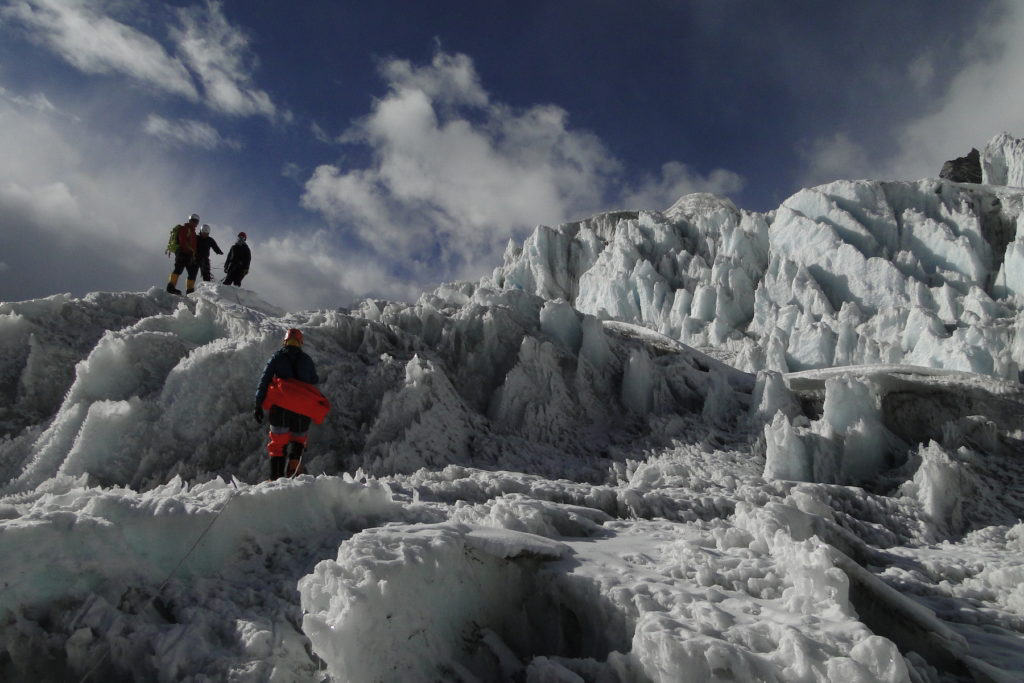 After descending around 2800′ (910m) we traversed the Nup La glacier back to our high camp and settled in for the night. Today, we awoke at 6 AM and helicoptered down to our base camp located at the Gokyo 5th lake, then continued by helicopter to Kathmandu for a celebratory dinner this evening. It’s been somewhat of a culture shock for us today, going from isolation in a high altitude alpine zone in a remote corner of the highest mountain range on Earth, to a bustling city. We all feel very blessed to have concluded a safe climbing expedition in a beautiful mountain environment, and to now be heading home to our friends and loved ones. For me personally, yesterday was an extra special summit day, as it was my 39th birthday and I was able to share it with friends in a spectacular place never before visited by anyone. 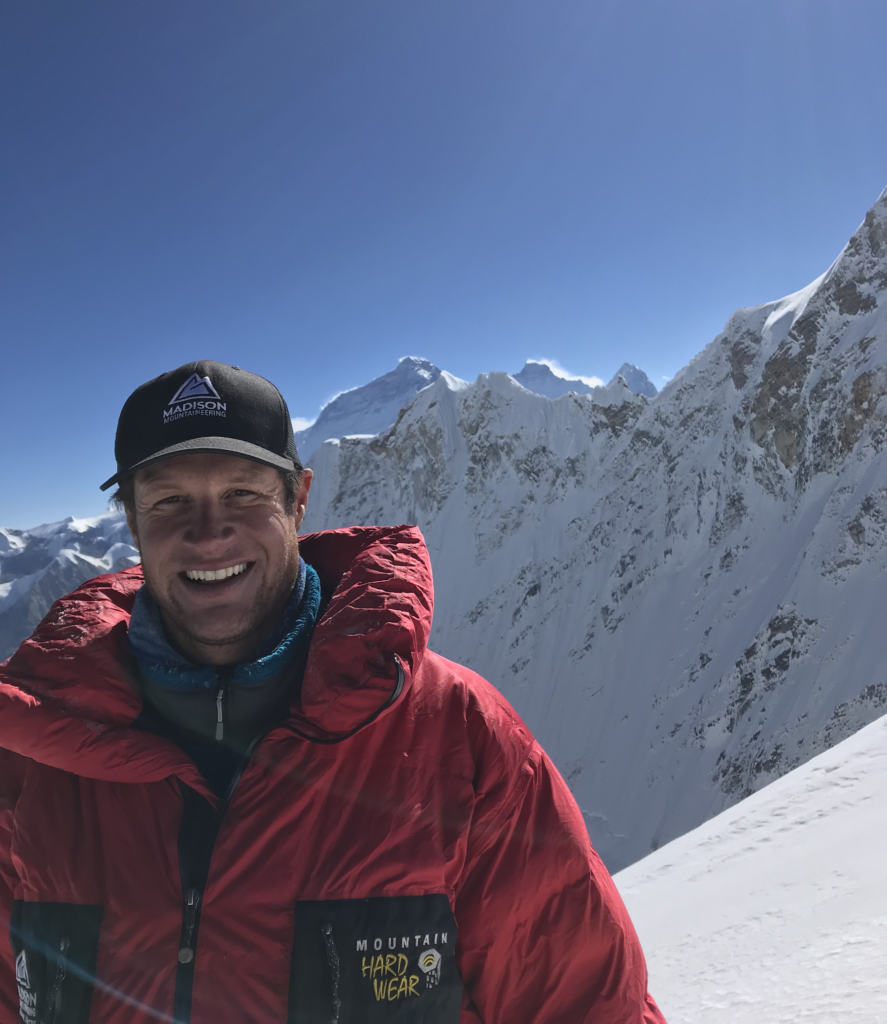